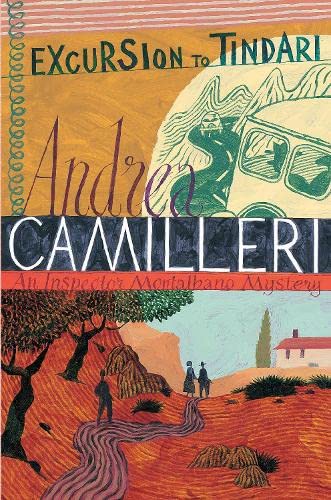 Excursion to Tindari by Andrea Camilleri

Excursion to Tindari by Andrea Camilleri

The fifth in the hit Italian crime series, Excursion to Tindari is another darkly comic detective story featuring Inspector Montalbano.

Maybe a phrase, a line, a hint somewhere would reveal a reason, any reason, for the elderly couple's disappearance. They'd saved everything . . . there was even a copy of the 'certificate of living existence', that nadir of bureaucratic imbecility . . . What was the 'protocol', to use a word dear to government offices? Did one simply write on a sheet of paper something like: 'I, the undersigned, Salvo Montalbano, hereby declare myself to be in existence', sign it, and turn it in to the appointed clerk?

A young Don Juan is found murdered in front of his apartment building early one morning, and an elderly couple is reported missing after an excursion to the ancient site of Tindari - two seemingly unrelated cases for Inspector Montalbano to solve amid the daily complications of life at Vigata police headquarters.

But when Montalbano discovers that the couple and the murdered young man lived in the same building, his investigation stumbles onto Sicily's brutal 'New Mafia', which leads him down a path more evil and more far-reaching than any he has been down before.

Excursion to Tindari is followed by the sixth novel in the Inspector Montalbano series, The Scent of the Night.

A joy to read. * The Times *
This savagely funny police procedural proves that sardonic laughter is a sound that translates ever so smoothly into English. * New York Times *
Andrea Camilleri was one of Italy's most famous contemporary writers. The Inspector Montalbano series, which has sold over 65 million copies worldwide, has been translated into thirty-two languages and was adapted for Italian television, screened on BBC4. The Potter's Field, the thirteenth book in the series, was awarded the Crime Writers' Association's International Dagger for the best crime novel translated into English. In addition to his phenomenally successful Inspector Montalbano series, he was also the author of the historical comic mysteries Hunting Season and The Brewer of Preston. He died in Rome in July 2019.
GOR001289096
9780330493031
0330493035
Excursion to Tindari by Andrea Camilleri
Andrea Camilleri
Inspector Montalbano mysteries
Used - Very Good
Paperback
Pan Macmillan
2006-07-07
320
Short-listed for CWA International Dagger 2006 (UK)
Book picture is for illustrative purposes only, actual binding, cover or edition may vary.
This is a used book - there is no escaping the fact it has been read by someone else and it will show signs of wear and previous use. Overall we expect it to be in very good condition, but if you are not entirely satisfied please get in touch with us
Trustpilot