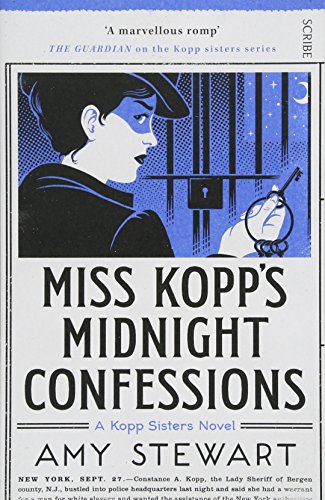 The feisty, fiery Kopp sisters are back in another unforgettable romp by HWA-longlisted international bestseller Amy Stewart.

When deputy sheriff Constance Kopp notices how many young women are being jailed over dubious charges of waywardness, incorrigibility, and moral depravity, she smells a rat. But what can she do to fight the forces of sexism? And how will her principles fare when her own sister, Fleurette, starts misbehaving?

Against the backdrop of the First World War, and drawn once again from the true story of the Kopp sisters, Miss Kopp's Midnight Confessions is a spirited page-turner that will delight fans of historical fiction and light-hearted detective fiction alike.

"Constance's ability to hold her own in male-dominated investigations and courtrooms, as well as her determination to present the facts, makes her a welcome 'vision of an entirely different kind of woman', hopefully with more tales to come. Lively and admirable female characters emboldened by their circumstances, impeccably realized and given new life by Stewart."

"The cases here are based on the experiences of real women, a technique that Stewart has employed in previous volumes. Collectively, the story lines intersect to create an intriguing window into women's rights and the social mores that women challenged on the eve of World War I. VERDICT A lovely addition for series fans and aficionados of historical fiction."

'As with its predecessors, the appealing central character hooks us in to a lively, absorbing story that happens to be (mostly) true.'

'[The] compelling continuing story of one of the great early characters of the women's independence movement.'

'Miss Kopp's Midnight Confessions has strong storytelling, believable characters, often uncomfortable truths and the compelling continuing story of one of the great early characters of the women's independence movement.'

* Crime Review *
Amy Stewart is the New York Times bestselling author of nine books, including Girl Waits with Gun and the rest of the Kopp Sisters series, which are based on the true story of one of America's first female deputy sheriffs and her two rambunctious sisters. Her popular non-fiction titles include The Drunken Botanist, Wicked Plants, and Flower Confidential. She lives in Portland with her husband Scott Brown, a rare book dealer. They own an independent bookstore called Eureka Books, which is so independent that it lives in California while they live in Oregon.
GOR009078557
9781911344599
1911344595
Miss Kopp's Midnight Confessions by Amy Stewart
Amy Stewart
Kopp sisters
Used - Very Good
Paperback
Scribe Publications
2018-01-11
256
N/A
Book picture is for illustrative purposes only, actual binding, cover or edition may vary.
This is a used book - there is no escaping the fact it has been read by someone else and it will show signs of wear and previous use. Overall we expect it to be in very good condition, but if you are not entirely satisfied please get in touch with us
Trustpilot