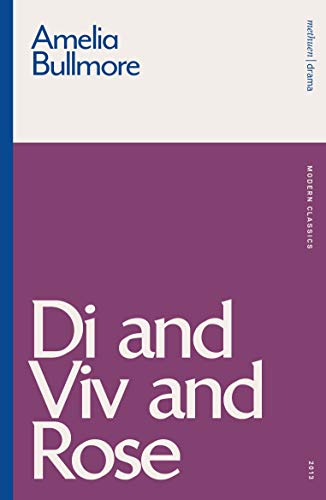 Di and Viv and Rose by Amelia Bullmore

Di and Viv and Rose by Amelia Bullmore

It connects emotionally with the audience, and is wittily written ... Bullmore makes you like, and believe in, her three characters ... The play also has a careering energy ... impossible not to like. (Guardian) Aged 18, three women join forces. Life is fun. Living is intense. Together they feel unassailable. Di and Viv and Rose charts the steady but sometimes chaotic progression of these three women's lives, from the highs to the lows, the problems that force them apart and their ultimately enduring bonds. A humorous and thoughtful exploration of friendship's impact on life and life's impact on friendship, this bittersweet comedy premiered at the Hampstead Theatre, London, in 2013. This new Modern Classics edition features an introduction by Professor Elizabeth Kuti.
It achieves what it sets out to do - show how the lives of a trio of women are shaped by their friendship over some twenty-seven years - in a manner that brims over with warm, effervescent humour and sharp, unsentimental perceptiveness . . . The long vista of the years helps Bullmore to show with moving clarity the intricate way that life and friendship inform each other and how the stock of mutual memories can contain both smarting, buried grievances and the means to dissolve them eventually in shared, helpless laughter. * Independent *
It connects emotionally with the audience, and is wittily written ... Bullmore makes you like, and believe in, her three characters ... The play also has a careering energy ... impossible not to like. * Guardian *
The pulling power is in the snap of individual lines, in the register of daily life, the gradual piling up of memories that eventually accumulate to make a shared history. * Observer *
Amelia Bullmore studied Drama at Manchester University. While at Manchester she was a member of Red Stockings, a women's theatre company founded by Helen Edmundson. Amelia performed with and co-wrote material for Red Stockings. By the late 1980s she was taking acting work elsewhere and in the 1994 she started writing for television. Amelia continues to work both as an actor and a writer. Her first play, Mammals, directed by Anna Mackmin, had an extended sell-out run at The Bush in 2005 and went on a national tour in 2006. The play was staged in Los Angeles in 2009. Mammals was shortlisted for the What's On Stage Best New Comedy award and co-won the Susan Smith Blackburn Award. Her adaptation of Ibsen's Ghosts, directed by Anna Mackmin, had a sell-out run at The Gate in 2007 and has since been produced at The Citizens Theatre, Glasgow. She wrote a short play for the Old Vic's 24 Hour Plays in 2009, which was directed by Anna Mackmin. Di And Viv And Rose was produced originally at Hampstead Theatre before transferring to the West End. The play has since been performed in Israel, Poland, Germany, Australia and New York and Canada as well as many productions in the UK. In July 2017 her monologue Anyway was performed at The Old Vic. For television, Amelia has written episodes of This Life, series 2 (Writers Guild Best Television Drama), Attachments and Scott and Bailey series 2, 3 and 4. She devised and co-wrote a series of ten-minute films, Black Cab. She was a Dennis Potter Award finalist in 2000 for her television screenplay The Middle. In 2019 she wrote TRACES, a 6 part forensic science crime drama which was screened on Alibi. She is currently working on TRACES 2. Amelia's radio writing includes four series of Craven (now being made into a television series), Cash Flow (part of the From Fact to Fiction series) and the afternoon plays The Middle, Family Tree, Looking for Mr King, The Bat Man and County Lines (broadcast June 2018) County Lines won Best Single Drama at the BBC Audio Drama Awards.
NPB9781350146136
9781350146136
1350146137
Di and Viv and Rose by Amelia Bullmore
Amelia Bullmore
Modern Classics
New
Paperback
Bloomsbury Publishing PLC
2021-02-11
120
N/A
Book picture is for illustrative purposes only, actual binding, cover or edition may vary.
This is a new book - be the first to read this copy. With untouched pages and a perfect binding, your brand new copy is ready to be opened for the first time
Trustpilot