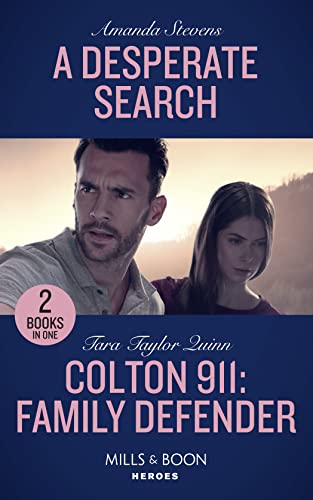 A Desperate Search
by Amanda Stevens

Something strange is going on at Echo Lake.

A Desperate Search
by Amanda Stevens

Something strange is going on at Echo Lake.

A series of obscure clues about his friend's death leads Detective Adam Thayer to coroner Nikki Dresden, who's eager to determine if one of the town's most beloved citizens was murdered. Now they must work together to unravel a deadly web of lies and greed...or die trying.

Struggling to protect his heart... and his family

One night between former FBI agent Riley Colton and Charlize Kent produced a surprise Riley never imagined-a baby! When his new family comes under fire, his paternal and investigative instincts kick in. As sparks fly, Riley and Charlize work together to track and capture a criminal...who will stop at nothing to destroy everything they hold dear.

Amanda Stevens is an award-winning author of over fifty novels. Born and raised in the rural south, she now resides in Houston, Texas. A USA Today bestselling author of 96 novels in twenty languages, Tara Taylor Quinn has sold more than seven million copies. Known for her intense emotional fiction, Ms. Quinn's novels have recieved critical acclaim in the UK and most recently from Harvard. She is the recipient of the Reader's Choice Award, and has appeared often on local and national TV, including CBS Sunday Morning. For TTQ offers, news, and contests, visit http://www.tarataylorquinn.com!
GOR010615442
9780263280395
026328039X
A Desperate Search / Colton 911: Family Defender: A Desperate Search (An Echo Lake Novel) / Colton 911: Family Defender (Colton 911: Grand Rapids) (Mills & Boon Heroes) by Amanda Stevens
Amanda Stevens
Used - Very Good
Paperback
HarperCollins Publishers
2020-06-11
512
N/A
Book picture is for illustrative purposes only, actual binding, cover or edition may vary.
This is a used book - there is no escaping the fact it has been read by someone else and it will show signs of wear and previous use. Overall we expect it to be in very good condition, but if you are not entirely satisfied please get in touch with us
Trustpilot