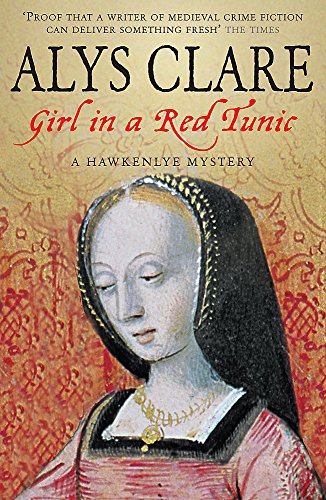 Girl In A Red Tunic by Alys Clare

Girl In A Red Tunic by Alys Clare

With Richard the Lionheart still being held hostage after his crusade, his people have been made paupers paying his ransom. The Abbess Helewise is struggling to keep her abbey going through a cold, brutal winter as she fends off starvation of her nuns and the local people.

Then her son returns to her in desperate need of help after a seperation of nearly twenty years. He claims his wife is suffering mental torments and his son is mute. But when a man is found strangled, dangling from a tree near the abbey, her son and his family flee the very next day.

Helewise and a local Knight, Josse d' Acquin, must investigate deep into the past to the time before Helewise took the veil. Were her handsome husband and enigmatic father-in-law all that they seemed? And can she prevent another terrible murder or will the sins of the fathers be laid upon her innocent son?

A worthy heir to Ellis Peters, though grittier, materialises * Poison in the Pen on FORTUNE LIKE THE MOON *
Proof that a writer of medieval crime fiction can deliver something fresh * The Times *
Cunningly shifting sympathies among virtually all the players, Clare spotlights first Helewise, then Josse, in a detecting competition that lifts the partners above their predictable gender roles ... immersing them in a suddenly engrossing tale. * Kirkus Reviews *
A rich and compelling mystery * Tangled Web *
Alys Clare is a history enthusiast who has written many novels under a different name. Alys Clare lives in Kent, where the Hawkenlye mysteries are set. You can reach her on her website www.alysclare.com
GOR001191245
9780340831144
0340831146
Girl In A Red Tunic by Alys Clare
Alys Clare
Used - Very Good
Paperback
Hodder & Stoughton
2006-08-24
304
N/A
Book picture is for illustrative purposes only, actual binding, cover or edition may vary.
This is a used book - there is no escaping the fact it has been read by someone else and it will show signs of wear and previous use. Overall we expect it to be in very good condition, but if you are not entirely satisfied please get in touch with us
Trustpilot