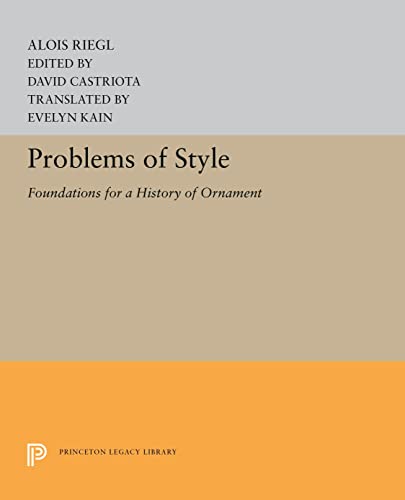 Problems of Style by Alois Riegl

Problems of Style: Foundations for a History of Ornament by Alois Riegl

Written at the height of the arts and crafts movement in fin-de-siecle Vienna, Alois Riegl's Stilfragen represented a turning point in defining art and understanding the sources of its inspiration. Demonstrating an uninterrupted continunity in the history of ornament from the ancient Egyptian through the Islamic period, Riegl argued that the creative urge manifests itself in both great art and the most humble artifact, and that change is an inherent part of style. This new translation, which renders Riegl's seminal work in contemporary, readable prose, allows for a fresh reexamination of his thought in light of current revisionist debate.
His discovery of infinite variation in the restatement of several decorative motifs--the palmette, rosette, tendril--led Riegl to believe that art is completely independent from exterior conditions and is beyond individual volition. This thinking laid the groundwork for his famous concept of Kunstwollen, or artistic intention.
Something that the translation will, I hope, convey, is the passion invsted in Riegl's enterprise. We are made to feel that the issues he discussed mattered vitally to him; it was the very nature of art and its relation to human life that were at stake, art as an absolute necessity. --From the preface of Henri Zerner
Alois Reigl (1858-1905) was Curator of Textiles at the Museum of Art and Industry in Vienna during most of his career and wrote many influential works on the history of art, including Spatromische Kunstgeschichte. Evelyn Kain is Associate Professor of Art History at Ripon College, Ripon, Wisconsin. David Castriota is Assistant Professor of Art History at Sarah Lawrence College.

The Princeton Legacy Library uses the latest print-on-demand technology to again make available previously out-of-print books from the distinguished backlist of Princeton University Press. These editions preserve the original texts of these important books while presenting them in durable paperback and hardcover editions. The goal of the Princeton Legacy Library is to vastly increase access to the rich scholarly heritage found in the thousands of books published by Princeton University Press since its founding in 1905.

GOR012622297
9780691655161
0691655162
Problems of Style: Foundations for a History of Ornament by Alois Riegl
Alois Riegl
Princeton Legacy Library
Used - Very Good
Paperback
Princeton University Press
20181204
448
N/A
Book picture is for illustrative purposes only, actual binding, cover or edition may vary.
This is a used book - there is no escaping the fact it has been read by someone else and it will show signs of wear and previous use. Overall we expect it to be in very good condition, but if you are not entirely satisfied please get in touch with us
Trustpilot