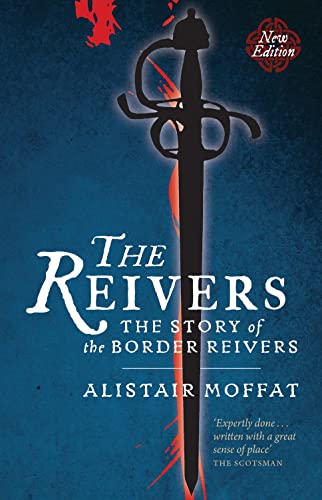 The Reivers by Alistair Moffat

Only one period in history is immediately linked to the whole area of the Scottish and English Border country, and that is the time of the Reivers. Whenever anyone mentions Reiver, no-one hesitates to add Border. This book tells the tale of a land that was a no-man's-land but a land over which blood was shed on both sides of an invisible border.

The Reivers: The Story of the Border Reivers by Alistair Moffat

From the early fourteenth century to the end of the sixteenth, the Anglo-Scottish borderlands witnessed one of the most intense periods of warfare and disorder ever seen in modern Europe. As a consequence of near-constant conflict between England and Scotland, Borderers suffered at the hands of marauding armies, who ravaged the land, destroying crops, slaughtering cattle, burning settlements and killing indiscriminately.

Forced by extreme circumstances, many Borderers took to reiving to ensure the survival of their families and communities, and for the best part of 300 years, countless raiding parties made their way over the border. The story of the Reivers is one of survival, stealth, treachery, ingenuity and deceit, expertly brought to life in Alistair Moffat's acclaimed book.

'a most compelling, thought-provoking and entertaining history'

'This is a page-turning history, lucidly written, and it is enhanced by a selection of five famous Border ballads. One of the best reads of the year, without doubt'

Alistair Moffat was born and raised in Kelso. He took degrees at the universities of St Andrews, Edinburgh and London and played rugby for Kelso and his universities. In 1976 he took charge of the Edinburgh Festival Fringe as it grew into the largest arts festival in the world. He now lives in Selkirk.

GOR009122347
9781780274454
1780274459
The Reivers: The Story of the Border Reivers by Alistair Moffat
Alistair Moffat
Used - Very Good
Paperback
Birlinn General
2017-03-06
336
N/A
Book picture is for illustrative purposes only, actual binding, cover or edition may vary.
This is a used book - there is no escaping the fact it has been read by someone else and it will show signs of wear and previous use. Overall we expect it to be in very good condition, but if you are not entirely satisfied please get in touch with us
Trustpilot