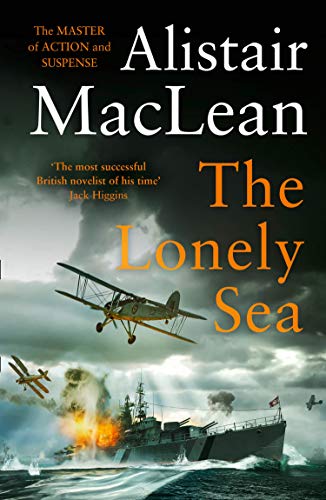 The Lonely Sea by Alistair MacLean

A collection of riveting tales of the sea including the story that launched his writing career and the account of the epic battle to sink the German battle ship, Bismarck.

The Lonely Sea by Alistair MacLean

A collection of riveting tales of the sea including the story that launched his writing career and the account of the epic battle to sink the German battle ship, Bismarck.

THE MASTER STORYTELLER IN HIS ELEMENT...

Alistair MacLean has an unmistakable and unrivalled skill in writing about the sea and its power and about the men and women who sail it, and who fight and die in it.

His distinctive voice was evident from his very first prize-winning story, 'The Dileas', and has been heard time and again in his international career as the author of such bestsellers as H.M.S. Ulysses and San Andreas.

The Lonely Sea starts where MacLean's career started, with 'The Dileas', and collects together his stories of the sea. Here is a treasury of vintage MacLean, compelling and brilliant, where the master storyteller is in his element.

'The most successful British novelist of his time' Jack Higgins

Alistair MacLean, the son of a minister, was brought up in the Scottish Highlands. In 1941 he joined the Royal Navy. After the war he read English at Glasgow University and became a teacher. Two and a half years spent aboard a wartime cruiser gave him the background for HMS Ulysses, his remarkably successful first novel, published in 1955. He is now recognized as one of the outstanding popular writers of the 20th century, the author of 29 worldwide bestsellers, many of which have been filmed.

GOR011561960
9780008336653
0008336652
The Lonely Sea by Alistair MacLean
Alistair MacLean
Used - Very Good
Paperback
HarperCollins Publishers
2021-01-07
304
N/A
Book picture is for illustrative purposes only, actual binding, cover or edition may vary.
This is a used book - there is no escaping the fact it has been read by someone else and it will show signs of wear and previous use. Overall we expect it to be in very good condition, but if you are not entirely satisfied please get in touch with us
Trustpilot