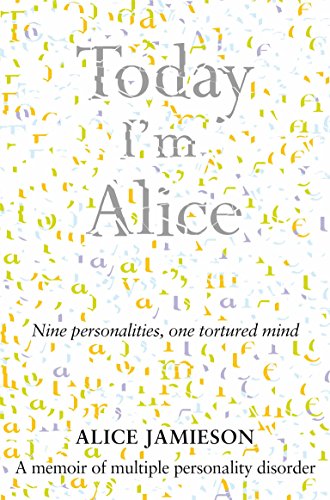 A powerful and compelling memoir.

When Alice was a teenager, strange things started happening to her. Hours of her life simply disappeared. She'd hear voices shouting at her, telling her she was useless. And the nightmares that had haunted her since early childhood, scenes of men abusing her, became more detailed . . . more real. Staring at herself in the mirror she'd catch her face changing, as if someone else was looking out through her eyes.

In Today I'm Alice, she describes her extraordinary journey from a teenage girl battling anorexia and OCD, drowning the voices with alcohol, to a young woman slipping further and further into mental illness. It was only after years lost in institutions that she was correctly diagnosed with multiple personality disorder. When her alternative personalities were revealed in therapy she discovered how each one had their own memories of abuse and a full picture of her childhood finally emerged. As she learned to live with her many 'alters', she set out to confront the man who had caused her unbearable pain.

Moving and ultimately inspiring, this is a gripping account of a rare condition, and the remarkable story of a courageous woman.

Alice Jamieson lives in the Midlands with her partner. She has recently trained as a physical fitness instructor.
GOR001577944
9780330508278
033050827X
Today I'm Alice: Nine Personalities, One Tortured Mind by Alice Jamieson
Alice Jamieson
Used - Very Good
Paperback
Pan Macmillan
2009-11-06
336
N/A
Book picture is for illustrative purposes only, actual binding, cover or edition may vary.
This is a used book - there is no escaping the fact it has been read by someone else and it will show signs of wear and previous use. Overall we expect it to be in very good condition, but if you are not entirely satisfied please get in touch with us
Trustpilot