Anatomy of a Suicide Alice Birch 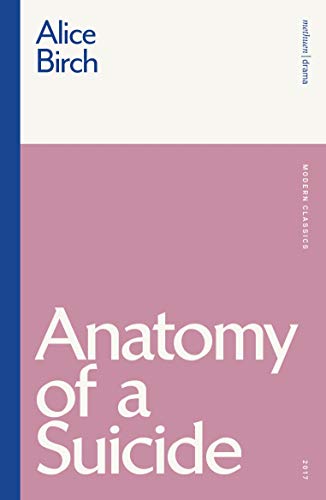 Anatomy of a Suicide by Alice Birch

Anatomy of a Suicide by Alice Birch

Alice Birch's new play is scored like a piece of music ... It is an extraordinary echoing text, full of pain and strange beauty. The three stories play out simultaneously on stage, the dialogue from one scene overlapping with the other two in a manner that borders on the choral ... Birch has provided a text that explores these ideas in a formally invigorating way. The Stage Three generations of women. For each, the chaos of what has come before brings with it a painful legacy. A powerful, unflinching look at a family afflicted with severe depression and mental illness. Presented as a triptych of plays performed side by side, this groundbreaking play reverberates with audiences and readers. Published for the first time in Methuen Drama's Modern Classics series, this edition features a brand new introduction by Ava Davies.
What determines our character? Nature or nurture? Genetic inheritance or social environment? It is an age-old debate, and Alice Birch now adds to it with this startling theatrical triptych about three generations of mothers and daughters... Birch's progress as a writer has been fascinating to watch... On the evidence so far, I would say Birch has a gift for radical experiment in the style of Caryl Churchill and Sarah Kane. In her new play we are confronted by three women, Carol, Anna and Bonnie, who we learn are mother, daughter and granddaughter. They exist in three different time zones but the story of their lives is told simultaneously. As Birch herself says, the text has been scored and can be read, or viewed, horizontally... I can, in fact, think of few exact parallels to this play. * Michael Billington, The Guardian *
The way conversations overlap, intersect, even chime exactly, as if words are echoing down the decades, is a compositional marvel... [any] vague misgivings pale beside the essential bravery and daring of it all: anyone who has experienced the nightmare of handed-on familial sadness, let alone the horror of suicide, will surely find in this a therapeutic-cathartic release. * Telegraph *
What a fiercely uncompromising, clinically emotional two hours this is Alice Birch, darling of the film world after her stark and powerful script for Lady Macbeth, returns in triumph to her home ground of the theatre for an unflinching examination of three generations of women in one family... an intricately interwoven work in which three separate scenes often play out simultaneously. * Evening Standard *
Alice Birch's previous work at the Royal Court includes Peckham: The Soap Opera and Revolt. She Said. Revolt Again (RSC). Other credits include: We Want You To Watch (National), The Lone Pine Club (Pentabus), Little Light (Orange Tree), Little on the Inside (Almeida / Clean Break), Salt (Comedie de Valence), Many Moons (Theatre 503), Flying the Nest (BBC Radio 4) and Lady Macbeth (BBC Films / BFI / Creative England). Alice was the co-winner of the 2014 George Devine Award for Revolt. She said. Revolt Again and winner of the Arts Foundation Award for Playwriting 2014.
NPB9781350200777
9781350200777
1350200778
Anatomy of a Suicide by Alice Birch
Alice Birch
Modern Classics
New
Paperback
Bloomsbury Publishing PLC
2021-09-23
256
N/A
Book picture is for illustrative purposes only, actual binding, cover or edition may vary.
This is a new book - be the first to read this copy. With untouched pages and a perfect binding, your brand new copy is ready to be opened for the first time
Trustpilot