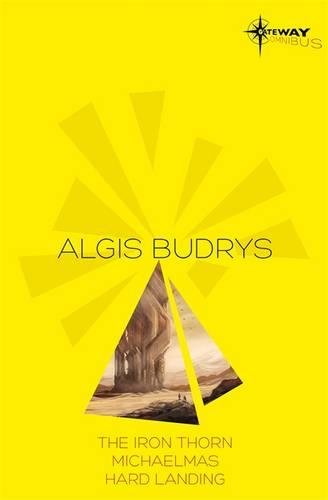 From the vaults of the SF Gateway, the most comprehensive digital library of classic SFF titles ever assembled, comes an ideal introduction to the work of acclaimed author Algis Budrys.

Algis Budrys was one of the few writers who managed to carve out a successful role as an influential critic and editor alongside his fiction writing. BENCHMARKS, his collection of reviews from the pages of GALAXY SCIENCE FICTION, is extremely well-regarded, and for almost two decades he was a judge of the Writers of the Future programme, but it is for his fiction that he is best known. This omnibus collects three of his later works: THE IRON THORN, MICHAELMAS and HARD LANDING.

THE IRON THORN: Honor White Jackson was a human being. But his planet was not Earth, nor his time Now. His world was dominated by a giant Iron Thorn. Beyond the reach of this tower there was supposedly nothing - except a frozen, airless desert where huge winged beasts called Amsirs roamed.

MICHAELMAS: Michaelmas and Domino, man and computer, were linked to each other, and to the complete database of Earth. There they virtually ruled the world. For by making the right subtle manipulations, they had the power to change the course of human destiny.

HARD LANDING: The body was found dead on the tracks, electrocuted. The autopsy confirmed what some had always feared, that we are not alone in the universe - and that even now, some visitors are still at large.

Algis Budrys (1931-2008) Born in East Prussia in 1931, Budrys and his family were sent to the United States when he was just five. After studying at the University of Miami and Columbia University, Budrys turned his hand to both writing and publishing science fiction. Over the years he worked as an editor, manager and reviewer for various publishing houses, while maintaining an impressive output of fiction and editing his own magazine, Tomorrow Speculative Fiction. He was shortlisted for numerous awards, including the Hugo and the Nebula, for his fiction and critical non-fiction. He died in 2008.
GOR009933246
9780575108332
0575108339
Algis Budrys SF Gateway Omnibus: The Iron Thorn, Michaelmas, Hard Landing by Algis Budrys
Algis Budrys
Used - Good
Paperback
Orion Publishing Co
20140116
400
N/A
Book picture is for illustrative purposes only, actual binding, cover or edition may vary.
This is a used book - there is no escaping the fact it has been read by someone else and it will show signs of wear and previous use. Overall we expect it to be in good condition, but if you are not entirely satisfied please get in touch with us
Trustpilot