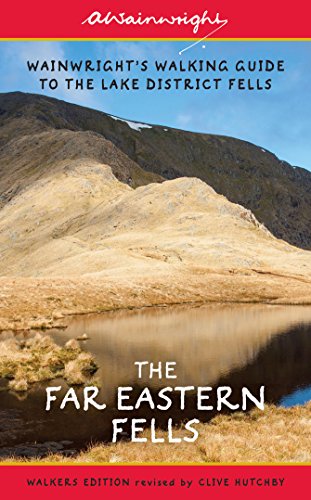 Book 2 of a new set of Walkers Editions of Alfred Wainwright's Pictorial Guides to the Lakeland Fells, fully updated and checked by Clive Hutchby.

One name above all others has become associated with walking in the Lake District: Alfred Wainwright, whose seven-volume Pictorial Guide to the Lakeland Fells, first published in 1955- 66, has become the definitive guidebook.

Wainwright' s meticulously hand-drawn maps, diagrams and drawings take walkers up the 214 principal hills and mountains of the Lake District, describing the main routes of ascent from different starting points, as well as lesser-known variants, showing the summit viewpoint panoramas and the ridge routes that can be made to create longer walks. Every page combines words and illustrations to present the routes in a way that is original, visually appealing and easy to follow.

This new edition of Wainwright' s Walking Guide to the Lake District Fells has been comprehensively revised. Paths, maps, diagrams and route descriptions have been checked and corrected throughout. These revisions have been undertaken by writer and designer Clive Hutchby, author of The Wainwright Companion.

The Far Eastern Fells, Book Two of Wainwright' s Walking Guide, covers the entire area east of Kirkstone Pass, bordered by Ullswater in the north and Windermere in the south, and includes the ascents of High Street, Ill Bell, Place Fell and Wansfell.

'. . . the most up to date publication for this area of the Lake District Fells'

'. . . the most up to date publication for this area of the Lake District Fells'

Born in Blackburn in 1907, Alfred Wainwright left school at the age of 13. A holiday at the age of 23 kindled a life-long love affair with the Lake District. Following a move to Kendal in 1941 he began to devote every spare moment he had to researching and compiling the original seven Pictorial Guides. He described these as his 'love letters' to the Lakeland Fells and at the end of the first, The Eastern Fells, he wrote about what the mountains had come to mean to him:

"I suppose it might be said, to add impressiveness to the whole thing, that this book has been twenty years in the making, for it is so long, and more, since I first came from a smoky mill-town (forgive me, Blackburn!) and beheld, from Orrest Head, a scene of great beauty, a fascinating paradise, Lakeland's mountains and trees and water. That was the first time I had looked upon beauty, or imagined it, even.

Afterwards I went often, whenever I could, and always my eyes were lifted to the hills. I was to find then, and it has been so ever since, a spiritual and physical satisfaction in climbing mountains - and a tranquil mind upon reaching their summits, as though I had escaped from the disappointments and unkindnesses of life and emerged above them into a new world, a better world.

In due course I came to live within sight of the hills, and I was well content. If I could not be climbing, I was happy to sit idly and dream of them, serenely. Then came a restlessness and the feeling that it was not enough to take their gifts and do nothing in return. I must dedicate something of myself, the best part of me, to them. I started to write about them, and to draw pictures of them. Doing these things, I found they were still giving and I still receiving, for a great pleasure filled me when I was so engaged - I had found a new way of escape to them and from all else less worth while.

Thus it comes about that I have written this book. Not for material gain, welcome though that would be (you see I have not escaped entirely!); not for the benefit of my contemporaries, though if it brings them also to the hills I shall be well pleased; certainly not for posterity, about which I can work up no enthusiasm at all. No, this book has been written, carefully and with infinite patience, for my own pleasure and because it has seemed to bring the hills to my own fireside. If it has merit, it is because the hills have merit."

CLIVE HUTCHBY climbed his very first Lakeland fell just two years after the publication of the last of legendary fellwalker and guidebook writer Alfred Wainwright's seven PICTORIAL GUIDES TO THE LAKELAND FELLS, and a full six years before the author relented to 'pressure' from his fans and produced his final guide to the mountains of the English Lake District, THE OUTLYING FELLS OF LAKELAND. After conquering Catbells, he has grown taller (and older, unfortunately), and in the intervening years since has edited newspapers in England and the United States and also worked in Ireland. In all three countries he has won journalism awards for writing and designing. Clive is the author of THE WAINWRIGHT COMPANION, published in 2012, of which Cumberland News wrote 'No-one has analysed the Pictorial Guidebooks produced by Alfred Waiwright more closely than Clive Hutchby. He's counted the clouds in every book'.

GOR007599440
9780711236554
0711236550
The Far Eastern Fells: Wainwright's Illustrated Walking Guide to the Lake District Fells Book 2 by Alfred Wainwright
Alfred Wainwright
Wainwright Walkers Edition
Used - Very Good
Paperback
Frances Lincoln Publishers Ltd
2015-08-26
316
N/A
Book picture is for illustrative purposes only, actual binding, cover or edition may vary.
This is a used book - there is no escaping the fact it has been read by someone else and it will show signs of wear and previous use. Overall we expect it to be in very good condition, but if you are not entirely satisfied please get in touch with us
Trustpilot