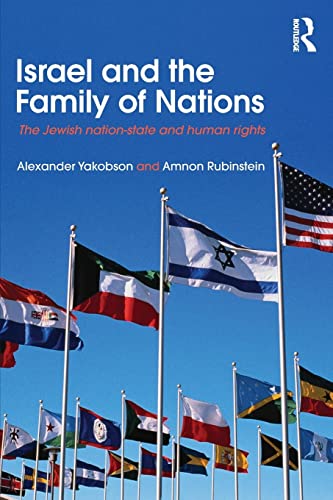 Israel and the Family of Nations by Alexander Yakobson (Hebrew University of Jerusalem, Israel)

Israel and the Family of Nations: The Jewish Nation-State and Human Rights by Alexander Yakobson (Hebrew University of Jerusalem, Israel)

Can Israel be both Jewish and truly democratic? How can a nation-state, which incorporates a large national minority with a distinct identity of its own be a state of all its citizens?

Written by two eminent Israeli scholars, a professor of constitutional law and a historian, Alexander Yakobson and Amnon Rubinstein are the first to treat Zionism and Israeli experience in light of other states' experiences and in particular of newly established states that have undergone constitutional changes and wrestled with issues of minorities. Citing various European, constitutions and laws, the authors explore concept of a Jewish State and its various meanings in the light of international law, and the current norms of Human Rights as applied to other democratic societies compatible with liberal democratic norms and conclude that international reality does not accord with the concept which regards a modern, liberal democracy as a culturally "neutral" and a nationally colourless entity.

In light of the new political map in Israel and the prospect of future disengagement from the West Bank, Israel and the Family of Nations is essential reading for all those who wish to understand Israel's future challenges.

"...Yakobson and Rubinstein have written a thoughtful and provocative study that sheds real light on Israel's approach to civic equality, in the context of the behavior of other democracies. The book will be a valuable addition to courses on the Israeli-Palestinian conflict, Middle East politics, or liberal democratic theory and practice." -- H-Net Reviews (2010), Michael Galchinksy, Georgia State University

'...it is an important book, whose ideas deserve to be widely heard' - The Economist, 2008

'The book is not a traditional pro-Israel polemic in the sense that it does not extol Israeli behavior, but seeks to point out that, in its basic definition and goals, Israel is well within the norms of democratic practice. In Yakobson's words, while "every state is unique, Israel is not 'exceptional' in the negative sense. It is not an abnormal democracy."

The book includes chapters on Israel's establishment and the UN debates on partition in 1947-9, when the international community voted for a "Jewish state"; the views of the Zionist movement on the character of the future Jewish state and the rights of the Arab minority; international law, human and minority rights and their application in different democratic countries; religion and state in Western democracies; the relationship between nation-states and their national minorities; along with other issues that come up in the intellectual debate over Israel's legitimacy.

In dealing with the argument equating Zionism with colonialism - a favorite in both academia and Arab politics - the authors once again bring homegrown Israeli anti-Zionists into the ring. ' - The Jerusalem Post, 2008

'In a Sophisticated discussion of notions of citizenship, deeply informed by the new literature on multiculturalism, Yakobson and Rubinstein provide array of examples that belie Israel's exceptionalism' - SA Jewish Report, April 2009

'Israel and the Family of Nations is a timely and necessary book. It is scholarly but accessible and should provide a basis for intelligent debate about israel and for defending its institutions and foundations' - Seth J. Frantzman, Middle East Quarterly, Fall 2009

Dr. Alexander Yacobson is a Senior lecturer in the history department of the Hebrew University of Jerusalem, Israel. Prof. Amnon Rubinstein, is currently Provost and Dean of the Radzyner School of Law at the Interdisciplinary Center (IDC) in Herzlia. He is a former Minister of Education and a regular contributor to Israseli Dailies.

Introduction 1. The establishment of the Jewish state - The UN debates in 1947 1.1 Israel's Declaration of Independence 1.2 The UNSCOP (United Nations Special Committee on Palestine) report 1.3 The Partition debate in the UN General Assembly 1.4 The dilemmas of the right of national self-determination 1.5 The historic right and the historic connection 1.6 "An alien body in the Arab Middle East" 1.7 The validity of the principle of partition 2. Two arguments: Zionist "colonialism" and the "invention" of the Jewish national identity 2.1 Colonialism and imperialist support 2.2 "The hope of two thousand years"? Modern Jewish identity and the question of historical continuity 3. Zionism and international norms 3.1 Everything goes back to Herzl 3.2 The question of Arabs' rights in the Zionist thought 4. The Jewish state and the Israeli democracy 4.1 "The Jewish state" in the Israeli discourse 4.2 The Jewish state and the rights of the Arab minority 4.3 The Arabs in Israel as a national minority 4.4 "The Jewish state", "the state of the Jews", "the state of the Jewish people" 5. "Either Jewish or democratic"? 5.1 "Jewish and democratic state" - oxymoron? 5.2 The Law of Return and the international norms of civic equality 5.3 The Jewish state and the state of all its citizens 5.4 "The Jewish-Israeli people" and the right of self-determination 5.5 Israel and the Jewish Diaspora - a national or an ethnic connection? 5.6 "The Israeli people" - a national identity common to all the citizens of the state? 5.7 The "post-national state" 6. "The neutrality of the state" and the democratic nation-state 6.1 The principle of neutrality and the various types of democratic regimes 6.2 Partition and "neutrality" 6.3 The principle of neutrality, the Law of Return and the problem of Palestinian refugees 6.4 Two examples of partition: India and Ireland 6.5 "Imperial nations" - Britain and Spain 6.6 "Composite" identities, national identity and citizenship 7. "Ethnic democracy", "ethnic nationalism", "civic nationalism" 7.1 "Ethnic democracy" - Prof. Sami Samocha's model 7.2 Civic nationalism and cultural homogeneity - the French model 7.3 Civic nationalism - US and other examples 7.4 "Second-rate democracy"? Epilogue: No other country Appendix A: Excerpts from constitutions of contemporary democratic countries Appendix B: Nansen's speech before League of Nations on the need to support the repatriation of ethnic Armenians to the Armenian Soviet Republic

NLS9780415781374
9780415781374
041578137X
Israel and the Family of Nations: The Jewish Nation-State and Human Rights by Alexander Yakobson (Hebrew University of Jerusalem, Israel)
Alexander Yakobson (Hebrew University of Jerusalem, Israel)
New
Paperback
Taylor & Francis Ltd
2010-07-09
246
N/A
Book picture is for illustrative purposes only, actual binding, cover or edition may vary.
This is a new book - be the first to read this copy. With untouched pages and a perfect binding, your brand new copy is ready to be opened for the first time
Trustpilot