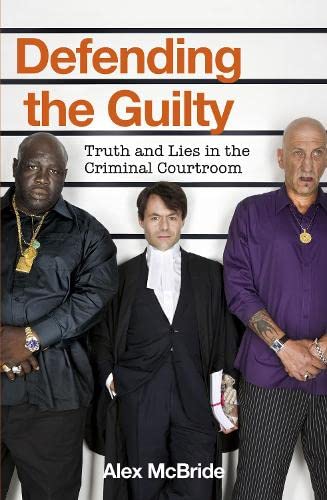 Defending the Guilty by Alex McBride

A memoir of the author that takes us behind the scenes of Britain's criminal justice system - in barristers' chambers, in the courtroom, in the cells and on the streets - introducing us to its outlandish personalities, arcane eccentricities and its many moving stories of triumph and defeat.

Defending the Guilty: Truth and Lies in the Criminal Courtroom by Alex McBride

"As a criminal barrister, you work with the material you get: a junkie shoplifter with thirty-five previous convictions and four packs of Lidl's frozen chicken stuffed down his trousers is heading only one way..."

Every day, like every criminal barrister in this country, Alex McBride stands up in court and, with nothing but quick-thinking, sharp-talking and his hard-won legal expertise, attempts to save people from criminal conviction, prison, even a lifetime behind bars. Sometimes he's had only a few hours to prepare his case. Sometimes his client is obviously guilty.

In this hilarious, heart-stopping memoir, he takes us behind the scenes of Britain's criminal justice system - in barristers' chambers, in the courtroom, in the cells and on the streets - introducing us to its outlandish personalities, arcane eccentricities and its many moving stories of triumph and defeat. Whether he's defending hapless teenagers at Harlow Youth Court or prosecuting gold bullion robbers at the Bailey, his hair-raising tales reveal all the secrets of courtroom success and what it takes to survive in this chaotic world of fluked escapes and crushed hopes. Throughout he attempts to answer that most important question: how do we ensure that the guilty are convicted and the innocent walk free?

Expert, authoritative, hilarious - an insider's fearless account of life at the criminal bar. Look out for it. -- Craig Raine * TLS Books of the Year *
Alex McBride captures the Dickensian life of the criminal barrister, and the gripping horrors of London's underworld, with great wit, honesty and precision -- Harry Mount, author of Amo, Amas, Amat...and All That
Very funny ... A fascinating overview of our criminal justice system * Daily Mail *
The real life of criminal barristers is expertly caught ... gripping little details * Literary Review *
Rollicks along ... with a good eye for detail and a neat turn of phrase * Observer *
Hilarious * The Sun *
An excellent blend of anecdote and more serious discussion -- Tom Bingham
Alex McBride is a criminal barrister. He is the author of the 'Common Law' column in Prospect magazine and has contributed to the New Statesman and various BBC programmes, including From Our Own Correspondent.
GOR001973530
9780670918300
067091830X
Defending the Guilty: Truth and Lies in the Criminal Courtroom by Alex McBride
Alex McBride
Used - Very Good
Paperback
Penguin Books Ltd
2010-04-01
288
Short-listed for CWA Gold Dagger for Non-Fiction 2010
Book picture is for illustrative purposes only, actual binding, cover or edition may vary.
This is a used book - there is no escaping the fact it has been read by someone else and it will show signs of wear and previous use. Overall we expect it to be in very good condition, but if you are not entirely satisfied please get in touch with us
Trustpilot