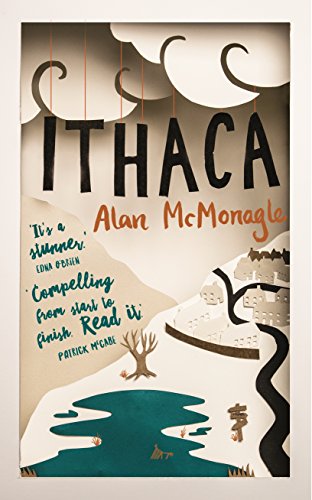 The darkly comic story of how far a lonely boy will go to find what he's looking for, and how in searching for what we've lost, we risk losing sight of what we have.

Longlisted for the 2017 Desmond Elliott Prize

'Alan McMonagle possesses a style that is all his own and I found his first novel compelling from start to finish. Read it.' Patrick McCabe, author of The Butcher Boy

Summer 2009, and eleven-year-old Jason Lowry is preoccupied with thoughts of the Da he has never known. In the meantime, his vodka-swilling, swings-from-the-hip Ma is busy entertaining her latest boyfriend and indulging her fondness for joyriding.

Jason escapes to the Swamp: a mysteriously rising pool of fetid water on the outskirts of the town. There, he meets the girl, a being as lost as himself. Together, they conjure exotic adventures - from ancient Egypt to the search for Ithaca, home of Odysseus. But what begin as innocent flights of fancy soon become forays into hazardous territory; the girl is a dangerous (and very committed) partner in crime.

Its exuberance and punch are beguiling. [Jason's] relationship with his ma is bedevilled by his lack of understanding, his observation of the adult world is often very funny indeed, and there's a poignancy and depth that give Jason's odyssey that extra fillip. * Daily Mail *
A fierce and funny novel that tackles tough topics with great imaginative flair. Ithaca doesn't take itself too seriously, and is all the more affecting for it . . . Jason's jaunts around town are reminiscent of Francie Brady in The Butcher Boy - young bucks who are wonderful mimics of adult mannerisms while simultaneously struggling to understand the intricacies and injustices of the grown-up world . . . For Jason and his friend the exotic Ithaca offers refuge and new beginnings. Skilfully meshing imagination with reality, McMonagle sets out to discover if the same things can be found at home. The novel belongs to Jason and his Ma, who, through an epic journey of adversity, manage to find their way back to each other * Irish Times *
It's pretty rare to find a rookie novelist writing with such conviction, authority and style. But McMonagle's prose has all three in spades. This is top-notch stuff . . . there is an originality of voice here that I have not come across in Irish fiction for quite some years now. And through the prism of Jason's energetic first-person narrative - that's bursting with black humour, tenderness, and emotion in equal measure - the socially deprived world he is growing up in comes into focus with absolute clarity . . . I nearly died laughing, and was exceptionally moved too, reading this stylish, dark existential tale: which explores the fine line between the language of dreams and reality, and between the material and mythological world too. * Sunday Independent *
It's a stunner. -- Edna O'Brien
Strange and wondrous; savage with vision, leaping with wit and moving in ways that are quite impossible to shake off, Alan McMonagle's Ithaca is a stunner. A quest story with the wisdom of an epic and with the whip-smart energy of a brilliantly fresh and audacious new voice. -- Belinda McKeon, author of Solace, winner of the Geoffrey Faber Memorial Prize

Ithaca more than confirms the promise shown by Alan McMonagle in his first book of short stories,
Psychotic Episodes. He possesses a style that is all his own and I found his first novel compelling from start to finish. Read it.

-- Patrick McCabe, author of The Butcher Boy
Flawless prose and razor dialogue . . . Mesmerising, unforgettable. -- Donal Ryan, author of The Spinning Heart
Splendid . . . Sweet yet dark, odd yet true. Full of fierce, elegant, misguided longing, and so finely written that I came to care so much about Jason. -- Sara Baume
Right from its remarkable opening sentence, this extraordinary debut had me hooked. A fierce, funny, on-its-own-terms, beautiful, heartbreaker of a novel. -- Joseph O'Connor
Fast and urgent and full of feeling and savage humour and all kinds of tenderness. -- Kevin Barry, author of City of Bohane
Ithaca, as the Homeric title suggests, is about the search for paradise, a getting-out rather than a caving-in, and gifts the reading world with a young voice that is as winningly resilient as it is tragic . . . an internal monologue that crackles with muzzy-headed electricity and sheer spirit . . . One cannot help but think about Pat McCabe's The Butcher Boy and the manner in which it mined the grotesque and distorted out of frolicking abandon * Irish Independent *
Comparisons to Pat McCabe's masterpiece The Butcher Boy abound, as both novels present the reader with brilliantly-formed child protagonists, full of back-alley grit and hilarious, dark narrative . . . Ithaca feels somehow other-worldly yet familiar . . . while McMonagle brings a timeless quality to his writing. It is a story full of humour, sometimes cute and innocent, but often blackened by experiences which Jason is too young to fully comprehend . . . Jason Lowry wins our heart from the very first page. By the novel's end, this crescendo of beautifully-crafted writing has the reader yearning for a future for him that reflects the dreams he retreats to so often. Ithaca is as hopeful as it is heart-breaking and Jason is a kid that we need to believe will succeed out there. We're too invested, too protective of him, to entertain any other outcome * RTE *
McMonagle's writing is crisp and sharp, at its best when dialogue drives the story forward. He's also a novelist who treads territory that Pat McCabe has previously made his own - there's a darkness here reminiscent of The Butcher Boy . . . Comic, tragic, and deeply affecting, Ithaca is a powerful debut. * Irish Examiner *
I loved this book and I cannot recommend it highly enough. If comparisons with Patrick McCabe's The Butcher Boy (since this story is also unreliably narrated by a protagonist who could be described as a juvenile delinquent) and Donal Ryan's The Spinning Heart (because of thematic similarities) are inevitable, Alan McMonagle has nothing to fear. Ithaca is certainly equal to such comparisons. It is assured and poised, hilarious and poignant, a tour de force. * Dublin Review of Books *
LOVED this. If the The Butcher Boy and Paddy Clarke Ha Ha Ha had a long lost brother, living in an episode of Pure Mule, we've found him in this book. Clever, funny, sad, kind - the lot. Irish book of the year so far for me. -- Ryan Tubridy
For these crazed, corrupt, corrupting times, at last, a voice with the courage to defy them, in prose as precise as it is shattering, Alan McMonagle proves himself to be a magnificent author, one of the best in contemporary fiction. * Frank McGuinness *
Alan McMonagle has written for radio, published two collections of short stories: Liar, Liar and Psychotic Episodes - both of which were nominated for the Frank O'Connor Award - and contributed stories to many journals in Ireland and North America. He lives in Galway. Ithaca is his first novel.
GOR008223965
9781509829859
1509829857
Ithaca by Alan McMonagle
Alan McMonagle
Used - Very Good
Paperback
Pan Macmillan
2017-02-28
320
Long-listed for Desmond Elliott Prize 2017
Book picture is for illustrative purposes only, actual binding, cover or edition may vary.
This is a used book - there is no escaping the fact it has been read by someone else and it will show signs of wear and previous use. Overall we expect it to be in very good condition, but if you are not entirely satisfied please get in touch with us
Trustpilot