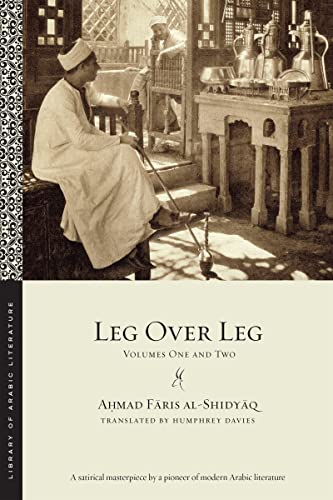 Leg over Leg: Volumes One and Two by Ahmad Faris al-Shidyaq

Leg over Leg recounts the life, from birth to middle age, of "the Fariyaq," alter ego of Ahmad Faris al-Shidyaq, a pivotal figure in the intellectual and literary history of the modern Arab world. The always edifying and often hilarious adventures of the Fariyaq, as he moves from his native Lebanon to Egypt, Malta, Tunis, England, and France, provide the author with grist for wide-ranging discussions of the intellectual and social issues of his time, including the ignorance and corruption of the Lebanese religious and secular establishments, freedom of conscience, women's rights, sexual relationships between men and women, the manners and customs of Europeans and Middle Easterners, and the differences between contemporary European and Arabic literatures, all the while celebrating the genius and beauty of the classical Arabic language.
Volumes One and Two follow the hapless Fariyaq through his youth and early education, his misadventures among the monks of Mount Lebanon, his flight to the Egypt of Muhammad 'Ali, and his subsequent employment with the first Arabic daily newspaper-during which time he suffers a number of diseases that parallel his progress in the sciences of Arabic grammar, and engages in amusing digressions on the table manners of the Druze, young love, snow, and the scandals of the early papacy. This first book also sees the list-of locations in Hell, types of medieval glue, instruments of torture, stars and pre-Islamic idols-come into its own as a signature device of the work.
Akin to Sterne and Rabelais in his satirical outlook and technical inventiveness, al-Shidyaq produced in Leg over Leg a work that is unique and unclassifiable. It was initially widely condemned for its attacks on authority, its religious skepticism, and its "obscenity," and later editions were often abridged. This is the first complete English translation of this groundbreaking work.
An English-only edition.

"The heroic achievement of award-winning translator Humphrey Davies marks the first ever English translation of this pivotal work An accessible, informative, and highly entertaining read." * Banipal Magazine *
"We're having a particularly good season for literary discoveries from the past, with recent publications of Volumes 1 and 2 of Ahmad Faris al-Shidyaq's 'Leg Over Leg' (1855)..." -- Martin Riker * New York Times Book Review *
"Humphrey Davies has rendered one of the most challenging texts of Arabic literature, al-Shidyaq's al-Saq 'ala l-saq, accessible to a wide range of readers for the first time.... The reader is plunged into al-Shidyaq's critical, humorous, uninhibited, sometimes bitter but profoundly humane, and utterly original masterpiece." -- Hilary Kilpatrick * Journal of the American Oriental Society *
"Humphrey Daviess masterful translation makes accessible this unique and fascinating work, deserving of wider recognition and study [] The translation adroitly and sympathetically captures the linguistic exuberance and literary inventiveness of the original" * Banipal Magazine *
"Humphrey Davies translation, published in four dual-language volumes, is a triumph. He skillfully renders punning, rhyming prose without breaking the spell Leg Over Leg stands out for both its stylistic brazenness and the excellence of the translation. With this bilingual edition, the Library of Arabic Literature helps fill a large cultural gap and alters our view of Arabic literature and the formal trajectory of the novel outside the West. Any reader for whom the term & world literature is more than an empty platitude must read Humphrey Davies's translation." -- John Yargo * Los Angeles Review of Books *
"...Leg Over Leg by the Lebanese intellectual Ahmad Faris al-Shidyaq, [has] long been held to be untranslatable and so [is] appearing, in [its] entirety, in English for the first time." -- Lydia Wilson * Times Literary Supplement *
"Al-Shidyaq, born in Lebanon in the early years of the nineteenth century, was a Zelig of the Arabic literary world, and his Leg Over Leg is a bawdy, hilarious, epically word-obsessed, and unclassifiable book, which has never been translated into English before." -- Sal Robinson * Moby Lives *
"It is not too early to state that the publication of this work, in this edition, is a game-changer. This is a foundational work of modern Arabic literature and its publication in English is long overdue but given how it is presented here, it was perhaps worth the wait. This edition, with helpful endnotes, the original Arabic text, and in a translation that both reads well and appears to closely mirror the original, seems, in almost every way, ideal I dont think Im exaggerating when I say that this is the most important literary publication of a translation into English, in terms of literary history and our understanding of it, in years" * The Complete Review *
"Its contemporaneity is astonishing... It would be doing Leg Over Leg a massive disservice to not make it clear how funny it is. This is a book that for all its challenges, all its insight into humanity, all its place in history, had me regularly laughing out loud." * Music and Literature *
Ahmad Faris al-Shidyaq (Author)
Ahmad Faris al-Shidyaq (1805 or 1806-1887) was a foundational figure in modern Arabic literature. Born to a prominent Maronite family in Lebanon, al-Shidyaq was a pioneering publisher, poet, essayist, lexicographer and translator. Known as ""the father of Arabic journalism,"" al-Shidyaq played a major role in reviving and modernizing the Arabic language.
Humphrey Davies (Translator)
Humphrey Davies is an award-winning translator of some twenty-five works of modern Arabic literature, among them Alaa Al-Aswany's The Yacoubian Building, five novels by Elias Khoury, including Gate of the Sun, and Ahmad Faris al-Shidyaq's Leg over Leg. He has also made a critical edition, translation, and lexicon of the Ottoman-period Brains Confounded by the Ode of Abu Shaduf Expounded by Yusuf al-Shirbini, as well as editions and translations of al-Tunisi's In Darfur and al-Sanhuri's Risible Rhymes from the same era. In addition, he has compiled with Madiha Doss an anthology in Arabic entitled Al-'ammiyyah al-misriyyah al-maktubah: mukhtarat min 1400 ila 2009 (Egyptian Colloquial Writing: selections from 1400 to 2009) and co-authored, with Lesley Lababidi, A Field Guide to the Street Names of Central Cairo. He read Arabic at the University of Cambridge, received his Ph.D. from the University of California at Berkeley, and previous to undertaking his first translation in 2003, worked for social development and research organizations in Egypt, Tunisia, Palestine, and Sudan. He is affiliated with the American University in Cairo.
Table of Contents Chapter 1: Raising a Storm 36 Chapter 2: A Bruising Fall and a Protecting Shawl 64 Chapter 3: Various Amusing Anecdotes 72 Chapter 4: Troubles and a Tambour 84 Chapter 5: A Priest and a Pursie, Dragging Pockets and Dry Grazing 92 Chapter 6: Food and Feeding Frenzies 108 Chapter 7: A Donkey that Brayed, a Journey Made, a Hope Delayed 116 Chapter 8: Bodega, Brethren, and Board 124 Chapter 9: Unseemly Conversations and Crooked Contestations 134 Chapter 10: Angering Women Who Dart Sideways Looks, and Claws like Hooks 148 Chapter 11: That Which Is Long and Broad 162 Chapter 12: A Dish and an Itch 174 Chapter 13: A Maqamah, or, a Maqamah on "Chapter 13" 190 Chapter 14: A Sacrament 202 Chapter 15: The Priest's Tale 212 Chapter 16: The Priest's Tale Continued 222 Chapter 17: Snow 244 Chapter 18: Bad Luck 254 Chapter 19: Emotion and Motion 282 Chapter 20: The Difference between Market-men and Bag-men 312
GOR009937738
9781479800728
1479800724
Leg over Leg: Volumes One and Two by Ahmad Faris al-Shidyaq
Ahmad Faris al-Shidyaq
Library of Arabic Literature
Used - Very Good
Paperback
New York University Press
2015-10-15
528
N/A
Book picture is for illustrative purposes only, actual binding, cover or edition may vary.
This is a used book - there is no escaping the fact it has been read by someone else and it will show signs of wear and previous use. Overall we expect it to be in very good condition, but if you are not entirely satisfied please get in touch with us
Trustpilot