No Way Out Adam Jowett 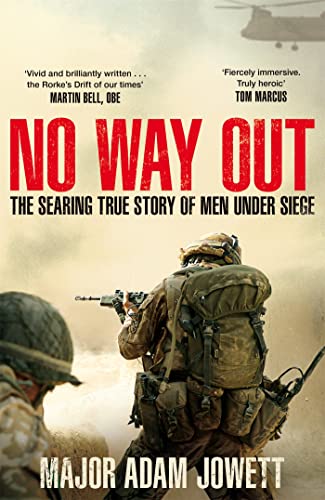 No Way Out by Adam Jowett

The gritty, searing true story of a British company under siege in Afghanistan - outnumbered, outgunned and out of time.

No Way Out: The Searing True Story of Men Under Siege by Adam Jowett

In Helmand province in July 2006, Major Adam Jowett was given command of Easy Company, a hastily assembled and under-strength unit of Paras and Royal Irish rangers. Their mission was to hold the District Centre of Musa Qala at any cost. Easy Company found themselves in a ramshackle compound, cut off and heavily outnumbered by the Taliban in the town.

In No Way Out, Adam evokes the heat and chaos of battle as the Taliban hit Easy Company with wave after wave of brutal attack. He describes what it was like to have responsibility for the lives of his men as they fought back heroically over twenty-one days and nights of relentless, nerve-shredding combat. Finally, as they came down to their last rounds and death stared Easy Company in the face, the siege took an extraordinary turn . . .

Powerful, highly-charged and moving, No Way Out is Adam's tribute to the men of Easy Company who paid a heavy price for serving their country.

Ferociously immersive. Truly heroic. The action is relentless and claustrophobic as, surrounded by death, Easy Company fought for each other. I challenge you to read a more brutally honest account of brotherhood, survival and belonging. -- Tom Marcus, bestselling author of Soldier Spy
A brilliant first hand account of men and war that crackles with action and brims with humanity -- Patrick Bishop, bestselling author of 3 Para, Fighter Boys, Bomber Boys, Air Force Blue
Soldierly, vivid and brilliantly written: a pulsating account of the battle for Musa Qala, the Rorke's Drift of our times. * Martin Bell, OBE, war reporter *
A superb account of the chaos and brutality of conflict which conveys the highs and lows of life on the front line with vivid accuracy. It is ultimately a fascinating story of modern soldiering and the bravery of Easy Company fighting a battle far from home. * Levison Wood *
A gritty, heart-pounding account of combat and courage that brings the siege of Musa Qala to life, from the 'crump' of mortar fire to the exhaustion and dogged determination of Easy Company as they fought on alone. -- Dan Jarvis MP
A truly extraordinary story of courage and sacrifice in the face of overwhelming odds . . . Brilliantly written and with a clear pride in the tenacity and grit of the nineteen-year-olds under his command who performed so bravely, Jowett's book belongs on the shelves of anyone interested in modern conflict and the experience of soldiering. -- Barney Campbell, author of Rain
Gripping, emotionally charged and intensely powerful, No Way Out is a dramatic and yet straightforwardly honest first-hand account of war in all its grim reality. * Lancashire Evening Post *
A nerve-shredding frontline testimony. * Daily Mail *
Major Adam Jowett is a hugely experienced career soldier who joined the army in 1991, receiving a commission into the Grenadier Guards. He transferred to the elite Parachute Regiment in 1998 and has served in Bosnia, Kosovo, Sierra Leone, Liberia and two tours of Afghanistan. Adam has found himself in appointments ranging from company commander at war to defence attache with the Foreign Office in Eastern Europe.
GOR009140884
9781509864706
1509864709
No Way Out: The Searing True Story of Men Under Siege by Adam Jowett
Adam Jowett
Used - Like New
Hardback
Pan Macmillan
2018-05-17
320
N/A
Book picture is for illustrative purposes only, actual binding, cover or edition may vary.
The book has been read, but looks new. The book cover has no visible wear, and the dust jacket is included if applicable. No missing or damaged pages, no tears, possible very minimal creasing, no underlining or highlighting of text, and no writing in the margins
Trustpilot