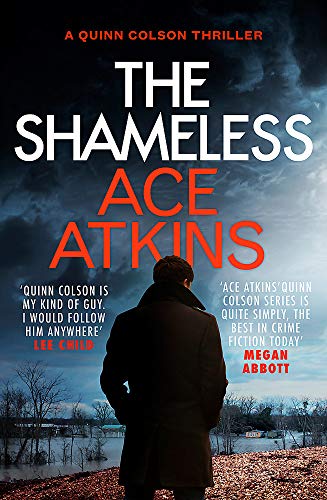 The Shameless by Ace Atkins

New revelations on a notorious local cold case raise ghosts of the past in the newest thriller from New York Times-bestselling author Ace Atkins.

The Shameless by Ace Atkins

New revelations on a notorious local cold case raise ghosts of the past in the newest thriller from New York Times-bestselling author Ace Atkins.

Twenty years ago, teenager Brandon Taylor walked into the Big Woods north of Tibbehah County, Mississippi, and never returned. For former Army Ranger-turned-sheriff Quinn Colson, the Taylor case has particular meaning. As a ten-year-old, Colson had been lost in those same woods, and came back from them alive and a local legend.

Years later, bones of a child are found in the woods, confirming for many the end to the Taylor story. As the case reopens, some point fingers to Quinn's uncle, the former sheriff, who took his own life in a cloud of corruption and shame. Still, Quinn's wife, Maggie, can't believe it. As a childhood friend of the Taylor boy, she thinks there's a darker conspiracy at work. Letters she receives from a mysterious inmate at a Tennessee state pen may hold the answers.

With a heated election for governor on the horizon and the strengthening of a criminal syndicate's death grip on the state, Quinn's search for answers will upset the corruption that's plagued his home since before he came back from Afghanistan. Greed, false piety, power, bigotry, and dirty deals make for a dangerous mix he knows all too well.

Quinn Colson is my kind of guy. I would follow him anywhere. - Lee ChildQuinn Colson is an American hero in a time when we need him - C.J. BoxAce Atkins is one of the best crime writers at work today - Michael Connelly
One of the best crime writers working today, Ace Atkins has been nominated for multiple major awards in crime fiction, including the Edgar three times, twice for novels about former U.S. Army Ranger Quinn Colson. He's written eight books in the Colson series, with many more to come. He continued Robert B. Parker's iconic Spenser character after Parker's death in 2010, and has added seven best-selling novels in that series. A former newspaper reporter and SEC football player, Ace also writes essays and investigative pieces for several national magazines including Time, Outside, and Garden & Gun. He lives in Oxford, Mississippi with his family, where he's friend to many dogs and several bartenders. Find out more about Ace and his novels on his official website: aceatkins.com, on Facebook Ace Atkins, and on Twitter @aceatkins.
GOR012110779
9781472155016
1472155017
The Shameless by Ace Atkins
Ace Atkins
Quinn Colson
Used - Like New
Paperback
Little, Brown Book Group
20190711
464
null null null null null null null null null null
Book picture is for illustrative purposes only, actual binding, cover or edition may vary.
The book has been read, but looks new. The book cover has no visible wear, and the dust jacket is included if applicable. No missing or damaged pages, no tears, possible very minimal creasing, no underlining or highlighting of text, and no writing in the margins
Trustpilot