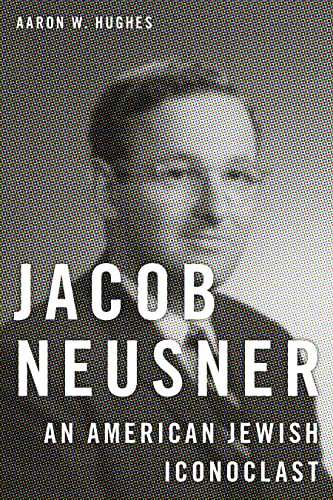 Biography: Neusner is a social commentator, a post-Holocaust theologian, and an outspoken political figure. Jacob Neusner (born 1932) is one of the most important figures in the shaping of modern American Judaism. He was pivotal in transforming the study of Judaism from an insular project only conducted by-and of interest to-religious adherents to one which now flourishes in the secular setting of the university. He is also one of the most colorful, creative, and difficult figures in the American academy. But even those who disagree with Neusner's academic approach to ancient rabbinic texts have to engage with his pioneering methods. In this comprehensive biography, Aaron Hughes shows Neusner to be much more than a scholar of rabbinics. He is a social commentator, a post-Holocaust theologian, and was an outspoken political figure during the height of the cultural wars of the 1980s. Neusner's life reflects the story of what happened as Jews migrated to the suburbs in the late 1940s, daring to imagine new lives for themselves as they successfully integrated into the fabric of American society. It is also the story of how American Jews tried to make sense of the world in the aftermath of the extermination of European Jewry and the subsequent creation of the State of Israel in 1948, and how they sought to define what it meant to be an American Jew. Unlike other great American Jewish thinkers, Neusner was born in the U.S., and his Judaism was informed by an American ethos. His Judaism is open, informed by and informing the world. It is an American Judaism, one that has enabled American Jews-the freest in history-to be fully American and fully Jewish.
"In this respectfully balanced biography, Hughes explores the life of Jacob Neusner, a renowned scholar of Judaism and a controversial figure in the American academy...The author presents an interesting and widely accessible life story that should appeal to readers interested in American Judaism, Jewish studies, or the academy itself." * Kirkus Reviews *
"Even those who disagree with Hughes's conclusions, however, will learn from Jacob Neusner. Well written and well researched, the volume serves as a valuable first step in understanding one of the most significant religion scholars of the past generation." * Journal of Religion *
"InJacob Neusner: An American Jewish Iconoclast, religious studies scholar Aaron Hughes has written an insightful biography of a different kind of academic." * H-Net Reviews *
"Aaron Hughes has written a comprehensive, compelling, and candid intellectual portrait of Jacob Neusner and his unparalleled lifetime of achievements. By detailing the original and vital contributions Neusner has made to Judaic and Religious Studies as well as to modern religious and political thought, Hughes has succeeded brilliantly in highlighting the singular significance Neusner holds as an academic, as a religious thinker, and as a public intellectual. Hughes has given his readers a captivating intellectual biography to savor!" -- David Ellenson,Chancellor Emeritus and former President of Hebrew Union College-Jewish Institute of Religion
"Aaron Hughess chronicle deftly displays the development and impact of Jacob Neusners intellectual achievements and the academic, political, and cultural contexts from which they emerged. With clarity and concision, this book limns the key issuessome of which are complex and reconditethat shaped the study of Judaism when Neusners career began and shows how his innovative, independent, and transformative scholarship created a contemporary academic field." -- William Scott Green,University of Miami
"A lively and readable account of the life of a fascinating figure who more than deserves a biography." -- Religious Studies Review
"Not only is Jacob Neusner a much needed, long awaited biography of perhaps the most important American Jewish thinker of the mid to late twentieth century, but it offers a window into the creation of Jewish studies in the American academy. Aaron Hughes illuminates Neusners pathbreaking role in the construction of Judaic studies scholarship as we now know it. More than this, he presents a balanced account of Neusner the radical, innovative, compelling and rambunctious scholar and Neusner the conservative political activist and public intellectual. Drawing connections between Neusners demanding and volatile personality and his extraordinary brilliance and productivity, Hughes sheds much needed light on this luminary. This is a concise book about excess that covers so much of what made Jacob Neusner, 'Neusner'!" -- Laura S. Levitt,Temple University
Aaron W. Hughes holds the Philip S. Bernstein Chair of Jewish Studies at the University of Rochester.
GOR009715429
9781479885855
1479885851
Jacob Neusner: An American Jewish Iconoclast by Aaron W. Hughes
Aaron W. Hughes
Used - Very Good
Hardback
New York University Press
2016-09-13
336
N/A
Book picture is for illustrative purposes only, actual binding, cover or edition may vary.
This is a used book - there is no escaping the fact it has been read by someone else and it will show signs of wear and previous use. Overall we expect it to be in very good condition, but if you are not entirely satisfied please get in touch with us
Trustpilot