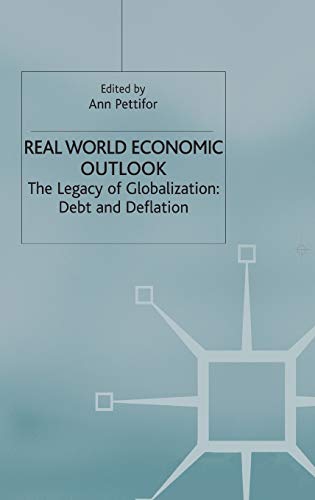 Real World Economic Outlook is a yearly publication that will review issues in the global economy from a different, radical and more realistic perspective.

Real World Economic Outlook: The Legacy of Globalization: Debt and Deflation by A. Pettifor

Real World Economic Outlook is a yearly publication that will review issues in the global economy from a different, radical and more realistic perspective. In stark contrast to the output of other institutions like the IMF and World Bank, this annual report is written in an accessible way, informing and offering alternative analyses of the global economy to a wide audience. Real World Economic Outlook 2003 's theme is globalization's true legacy: debt deflation. Globalization is examined not as a spontaneous event of economic and technological combustion, but as a deliberate strategy to place finance at the centre of our communities - whether local, national or global. The legacy of this strategy has proved disastrous. Individuals, households, governments and corporations have collectively been lured into a quagmire of debt and deflation.

'The globalization of the world economy is a fact of life and here to stay. In this first of a series of Reports by the New Economics Foundation, edited by the renowned campaigner Ann Pettifor, the dramatic consequences of economic and financial liberalization for the world in general, and for poor countries in particular, are starkly portrayed. For anyone wanting to understand the anti-globalization movement, Real World Economic Outlook should be their first port of call.' - Tony Thirlwall, University of Kent, UK

'Many churchgoers read the gospel as it if it has no economics. Economics, they argue, is for specialists, not for them. But money, economics and inequality are at the heart of the scriptures. Africans, particularly those in the new South Africa, are often blinded, and intimidated by the science of economics, and in particular by the economics of globalization. This annual report on the global economy - the Real World Economic Outlook - lifts the veil of complexity behind which many economists hide, makes economics easy to understand and explains the mechanisms which have led to historically unprecedented inequalities between the many who are poor, and the few who are now incredibly rich. If we are to challenge this injustice, and the politicians and economists that perpetuate it, then it is vital that we educate ourselves, move beyond mere rhetoric, and begin to challenge the so-called science of economics. This book does just that, which is why it is essential reading for Africans - in particular those in the churches, in universities and in finance ministries.' - The Most Reverend Njongonkulu Winston Hugh Ndungane

'This first annual Real Global Economic Outlook could not be more timely, as the world economy lurches from crisis toward a general debt deflation reminiscent of the Great Depression of the 1930s. In the opening chapter, Ann Pettifor, moving spirit and principal editor of this excellent initiative, explains that 'globalization' is driven by an instituted process of deregulation of financial capital from national and international control. The ever mounting debts of governments and coporations, at high real rates of interest sustained by central banks and international financial institutions, drive international competition, mergers and acquisitions - and the systematic disestablishment of social support systems.

The contributors to this volume from North and South include eminent economists Jospeph Stiglitz, Dani Rodrik, Robert Wade and Herman Daly. The authors combine professional excellence with lucid styles of writing accessible to the general public. In the context of the gross imbalance of resources available to critics of economic globablization, the Real Global Economic Outlook is an essential and welcome corrective to the annual publications of the World Bank and IMF.' - Kari Polanyi-Levitt, Emeritus Professor of Economics, McGill University

'All in all, this report is as unfashionable as kipper ties and loon pants. On the grounds that there is a world of difference between a credit-driven cyclical upswing and a sustainable recovery, it calls for the taming of financial markets, the upsizing of the state and downsizing the single global market. This challenge to what Orwell called the 'smelly little orthodoxies' is long overdue.' - The Guardian

'Another feat of trademark brilliance and determination, the IFI's are no doubt once again shaking in their boots...' - Bono, U2

ANN PETTIFOR is Director of Jubilee Research at the New Economics Foundation. She co-founded the Jubilee 2000 movement for the cancellation of the debts of the poorest countries. Jubilee 2000's global petition collected over 24 million signatures. In 2000, Ann Pettifor was awarded an honorary doctorate by the University of Newcastle and she received an honorary Masters from the Archbishop of Canterbury the following year.
PART I: GLOBAL TRANSFORMATION AND GLOBAL OUTLOOK Making Sense of our World; A.Pettifor Globalization and its Consequences; R.Greenhill Real World Economic Outlook; R.Greenhill Real World Environmental Outlook; A.Simms Inflation Paranoia, Slicing and Dicing Risk; J.Stiglitz PART 2: REAL OUTLOOK FOR THE WORLD'S REGIONS Middle East; E.Yeldan South and Central America; F.Serrano North America; D.Baker South Asia; J.Ghosh East Asia; K.S.Jomo Europe; J.Bush Africa; Z.Randriamaro PART 3: GLOBALIZATION AND ITS INCONSISTENCIES Globalization and its Inconsistencies; H.Daly Primitive Accumulation Revisited; G.Sen The Well-being of Nations; N.Marks Poverty and Income Distribution: What is the Evidence?; R.Wade Globalization: Economic Stagnation and Divergence A.Freeman PART 4: RISE OF THE FINANCE SECTOR Debt and Delusion; P.Warburton The Dollar Bill: Who Picks up the Tab?; M.Hudson The US Economy: A Changing Strategic Predicament; W.Godley Why Financial Markets Misbehave; D.Rodrik Globalizing Money: Dollarization in Latin America; F.Serrano Localizing Money - Alternative Currencies; D.Boyle Financial Architecture in the 20th Century; A.Pettifor Financial Architecture in the 21st Century?; J.d'Arista PART 5: NEW ERA? Framework for Economic Justice and Sustainability; A.Pettifor & R.Greenhill
GOR001967223
9781403917942
1403917949
Real World Economic Outlook: The Legacy of Globalization: Debt and Deflation by A. Pettifor
A. Pettifor
Used - Very Good
Hardback
Palgrave USA
2003-09-02
232
N/A
Book picture is for illustrative purposes only, actual binding, cover or edition may vary.
This is a used book - there is no escaping the fact it has been read by someone else and it will show signs of wear and previous use. Overall we expect it to be in very good condition, but if you are not entirely satisfied please get in touch with us
Trustpilot