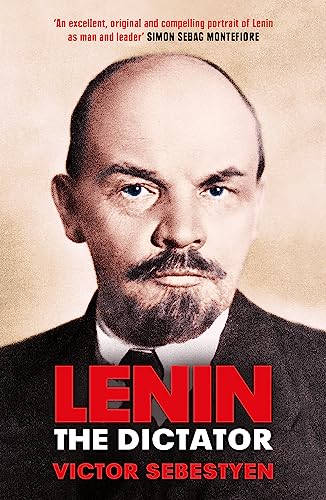 From acclaimed historian Victor Sebestyen comes a new life of the creator of the world's first communist state.

The cold, one-dimensional figure of Lenin the political fanatic is only a partial truth. Drawing on extensive material that has only recently become available, Sebestyen's gripping biography casts an intriguing new light on the character behind the politics.

In reality, Lenin was a man who loved nature as much as he loved making revolution, and his closest relationships were with women. He built a state based on terror. But he was a highly emotional man given to furious rages and deep passions. While never ignoring the politics, Sebestyen examines Lenin's inner life, his relationship with his wife and his long love affair with Inessa Armand, the most romantic and beguiling of Bolsheviks. These two women were as significant as the men - Stalin or Trotsky - who created the world's first Communist state with him.

An excellent, original and compelling portrait of Lenin as man and leader -- Simon Sebag Montefiore, author of STALIN: THE COURT OF THE RED TSAR
Richly readable ... enthralling but appalling -- Francis Wheen * MAIL ON SUNDAY *
Victor Sebestyen brings the man's complexities to life in Lenin the Dictator, balancing personality with politics in succinct and readable prose ... Sebestyen describes particularly keenly how this ruthless, domineering, often vicious man depended on three women to sustain him -- David Reynolds * NEW STATESMAN *
The attention to detail is flawless -- Alex Larman * THE OBSERVER *
The story of the Bolshevik revolution is fascinating in several ways, and Sebestyen does a good job of telling it ... entertaining -- Tibor Fischer * STANDPOINT *
Can first-rate history read like a thriller? With Lenin the Dictator the journalist Victor Sebestyen has pulled off this rarest of feats. How did he do it? Start with a Russian version of House of Cards and behold Vladimir Ilyich Lenin pre-empt Frank Underwood's cynicism and murderous ambition by 100 years. Add meticulous research by digging into Soviet archives, including those locked away until recently. Plow through 9.5 million words of Lenin's Collected Works. Finally, apply a scriptwriter's knack for drama and suspense that needs no ludicrous cliffhangers to enthrall history buffs and professionals alike -- Josef Joffe * NEW YORK TIMES *
In this new biography, Victor Sebestyen gives a vivid and rounded picture of Lenin the man ... Sebestyen brings to the task a gift for narrative and for describing his rich cast of characters -- Margaret MacMillan * THE OLDIE *
Victor Sebestyen does an impressive job of telling Lenin's life story ... it is a highly readable overview -- Evan Mawdsley * BBC HISTORY MAGAZINE *

In his engagingly written biography the author ... captures all the drama of Lenin's leadership against
a background of imperial collapse, the ravages of war and the building of a dictatorship ... the Bolshevik leader emerges from these pages as a man unencumbered by critical self-awareness, by doubts or by any moral conflict over the extraordinary costs inflicted on others by the pursuit of his revolutionary goals

-- Daniel Beer * GUARDIAN *
An enthralling portrait of one of the key figures of the 20th century * MAIL ON SUNDAY Summer Books *
A fresh and powerful portrait of Lenin, and at just the right time. As Bolshevik ideas and tactics return to world politics, Victor Sebestyen focuses our attention on the man who invented them -- Anne Applebaum, author of RED FAMINE: STALIN'S WAR ON UKRAINE
Page-turning and enlightening -- Victoria Hislop
An excellent new biography -- Saul David * EVENING STANDARD *
In this insightful biography, Sebestyen examines the brilliant but ruthless personality whom journalists glorified and shows why the dictatorial government that Lenin imposed on his country made a nationwide cult of personality inevitable ... Readers see a great historical tragedy play out, however, as Russia's dying Red Tsar leaves his most bloody-minded lieutenant in prime position to take over the brutal police state he has forged. A compelling portrait of an epoch-making figure -- Bryce Christensen * BOOKLIST starred review *
An accessible, fair and marvellously written biography that reinforces what we have learned in the past three decades ... For anyone interested in an introduction to the world's greatest revolutionary that draws on the latest research, Mr Sebestyen's Lenin would be the place to start -- Douglas Smith * WALL STREET JOURNAL *
Victor Sebestyen is the acclaimed author of TWELVE DAYS, REVOLUTION 1989 and 1946. He was born in Budapest, and was a child when his family left Hungary as refugees. As a journalist, he has worked for numerous British newspapers, including the EVENING STANDARD, DAILY MAIL and THE TIMES. He reported widely from Eastern Europe when Communism collapsed and the Berlin Wall came down in 1989. He covered the wars in former Yugoslavia and the breakup of the Soviet Union. At the EVENING STANDARD he was foreign editor, media editor and chief leader writer. He is an associate editor of NEWSWEEK.
GOR009377511
9781474601054
1474601057
Lenin the Dictator Victor Sebestyen
Victor Sebestyen
Gebraucht - Wie Neu
Broschiert
Orion Publishing Co
2018-07-26
592
N/A
Die Abbildung des Buches dient nur Illustrationszwecken, die tatsächliche Bindung, das Cover und die Auflage können sich davon unterscheiden.
Das Buch wurde gelesen, ist aber in gutem Zustand. Alle Seiten sind intakt, der Einband ist unversehrt. Leichte Gebrauchsspuren am Buchrücken. Das Buch wurde gelesen, sieht jedoch noch wie neu aus. Der Bucheinband weist keine sichtbaren Gebrauchsspuren auf. Gegebenenfalls ist auch ein Schutzumschlag verfügbar. Keine fehlenden oder beschädigten Seiten, keine Risse, eventuell minimale Knicke, keine unterstrichenen oder markierten Textstellen, keine beschrifteten Ränder.