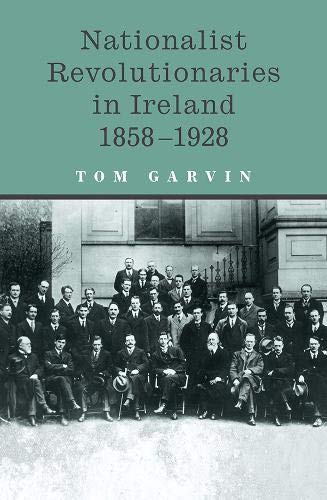 Analyses the social origins of the revolutionary politicians who became the rulers of Ireland after 1922, and examines their political preconceptions, ideologies and prejudices.

The present-day Republic of Ireland was created by a revolutionary elite which developed between 1858 and 1914. This book analyses the social origins of the revolutionary politicians who became the rulers of Ireland after 1922 and examines their political preconceptions, ideologies and prejudices. Tom Garvin argues that in many cases they were not only influenced by old agrarian grievances or memories of the Famine, but also, and more immediately, by the contemporary Catholic abhorrence of the Protestant and secular world symbolised by London, England and, to some extent, America.

Drawing on the evidence of private letters and diaries as well as the popular nationalist journalism of the period, Nationalist Revolutionaries in Ireland makes a hugely original contribution to Irish historiography. It reconstructs the private thoughts behind the public faces of the emergent leadership of independent Ireland, and also puts that leadership in comparative international perspective.

This book, a classic of its type, now appears for the first time in paperback. It demonstrates all of Tom Garvin's intellectual and interpretative daring, his willingness to address major political and historical issues in a wholly original and thought-provoking way and his search for historical trails ignored by others.

Tom Garvin is Emeritus Professor of Politics at University College Dublin and an honorary research fellow at IBIS. His books include Nationalist Revolutionaries inIreland (1987), 1922: The Birth of Irish Democracy (1996), and Preventing theFuture:Why was Ireland so poor for so long? (2004). He is also the author of many articles and chapters on Irish and comparative politics. He is an alumnus of the Woodrow Wilson International Center for Scholars, Washington D.C., and a Member of the Royal Irish Academy. He has taught at the University of Georgia, Colgate University and Mount Holyoke College. Most recently, his biography of Sean Lemass, Judging Lemass, was published by the Royal Irish Academy in 2009.