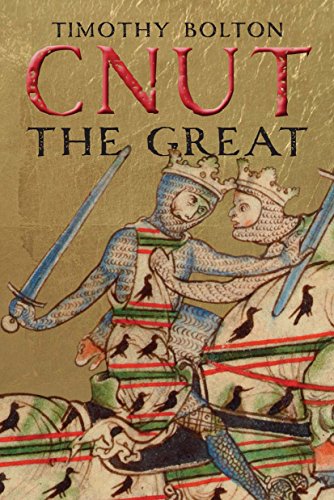 Historian Timothy Bolton offers a fascinating reappraisal of one of the most misunderstood of the Anglo-Saxon kings: Cnut, the powerful Danish warlord who conquered England and created a North Sea empire in the eleventh century. This seminal biography draws from a wealth of written and archaeological sources to provide the most detailed accounting to date of the life and accomplishments of a remarkable figure in European history, a forward-thinking warrior-turned-statesman who created a new Anglo-Danish regime through designed internationalism.
"A gripping and revelatory biography of Britain's Danish conqueror."- Simon Sebag Montefiore, The Week

"Yale's invaluable English Monarchs series receives an impressive addition with this life of Cnut, the Danish warlord who conquered England in the first half of the 11th century. Bolton, a Stockholm-based scholar, restores Cnut's image by drawing on a full range of Scandinavian and Anglo-Saxon sources."
-Tony Barber, Financial Times

"How did Cnut win this power and how did he use it? Timothy Bolton is a formidable scholar who endeavours to answer these questions."-Lawrence James, The Times, 11th February 2017

"It is evident that Timothy Bolton masters the English written sources of the period to perfection. We get a finely tuned history of the means and ways in which Cnut wielded power through the machinery of government, carried out by the personnel in the English church. It is also apparent that Bolton has a fine ear for the complexities of utilising the few, limited and late written sources from Scandinavia... it is an invaluable introduction for cultural historians and archaeologists to what a proper political historian fostered in the English tradition can wring out of source material."-Karen Schousbe, Medieval Histories
Timothy Bolton's book is a timely reminder that seas connect as much as they separate, and that even a thousand years ago it was common to hear different languages on English streets... It is pleasing to see an early medieval king given the same attention as his successors."-Lesley Abrams, TLS
"Bolton has made an exhaustive study of the available sources, both texts and artefacts. His narrative has the virtues of a well-told story."-Dr. Nicholas Orme, Church Times
"This is a very readable and serviceable overview of the reign of Cnut, and a useful recapitulation, at a reasonable price, of many aspects of Bolton's important original study" -Barbara Yorke, The English Historical Review
"Smart, pithy, scholarly biography of one of England's least-understood but most intriguing kings. Another excellent volume in the authoritative Yale Monarchs series."-Dan Jones, author of The Plantagenets and The Wars of The Roses
"Through judicious use of Northern sources Timothy Bolton gives us a Cnut firmly rooted in Scandinavia, and a nuanced portrait of an English monarch and Scandinavian ruler active on a European stage."-Pauline Stafford, author of Queen Emma and Queen Edith
"Drawing on a range of rich resources from Old Norse sagas and poetry to charters, chronicles and laws from England, Timothy Bolton presents a fresh and engaging account of the compelling figure of Cnut in all his diverse glory."-Rory Naismith, King's College London, author of Money and Power in Anglo-Saxon England
"In this stimulating and timely study, Timothy Bolton illuminates a king and an age of supreme importance. Cnut's forging of an Anglo-Scandinavian Empire and England's place within it are explored in original and thought-provoking ways - fresh evidence is put forward and well-known material considered anew. Bolton is a confident guide through the tangled thicket of sources that surround Cnut, handling English and Scandinavian texts with insight and sensitivity."- Martin J. Ryan, co-author of The Anglo-Saxon World
Timothy Bolton is the author of The Empire of Cnut the Great. He is an honorary fellow of both Cardiff and Aberdeen Universities.
GOR008476111
9780300208337
0300208332
Cnut the Great Timothy Bolton
Timothy Bolton
The English Monarchs Series
Gebraucht - Sehr Gut
Gebundene Ausgabe
Yale University Press
2017-02-03
272
N/A
Die Abbildung des Buches dient nur Illustrationszwecken, die tatsächliche Bindung, das Cover und die Auflage können sich davon unterscheiden.
Dies ist ein gebrauchtes Buch. Es wurde schon einmal gelesen und weist von der früheren Nutzung Gebrauchsspuren auf. Wir gehen davon aus, dass es im Großen und Ganzen in einem sehr guten Zustand ist. Sollten Sie jedoch nicht vollständig zufrieden sein, setzen Sie sich bitte mit uns in Verbindung.