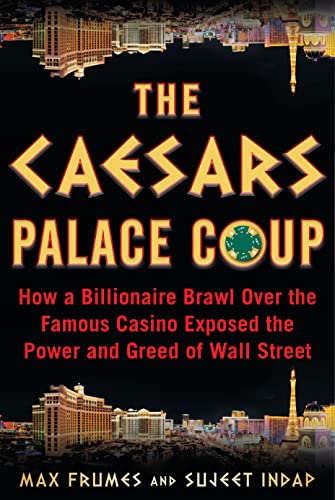 The Caesars Palace Coup: How a Billionaire Brawl Over the Famous Casino Exposed the Power and Greed of Wall Street Sujeet Indap

From the Vegas Strip to Wall Street boardrooms, Chicago courthouses, and the halls of Congress, modern corporate titans collide in this explosive true story of how private equity firm Apollo Global Management's thirty-billion-dollar buyout of Caesars Entertainment turned into unprecedented bankruptcy of the gaming empire.

In the bestselling tradition of Michael Lewis's The Big Short and Ben Mezrich's Bringing Down the House, journalists Max Frumes and Sujeet Indap deliver a page-turning account of a Las Vegas casino heist executed not by gangsters or con men, but rather by Wall Street tycoons. After an MIT math wizard turned a once sleepy casino chain into the biggest gaming company in the world, headlined by the storied Caesars Palace, two of the most storied private equity firms in the world swooped in and took control in a blockbuster buyout.

Then, the global economy went into its worst meltdown since the Great Depression.

Caesar's Palace Coup follows the jokers, kings, and called bluffs of the modern distressed-debt-investing world as the two firms executed a series of brilliant, if edgy, transactions to keep their investment afloat while waiting for Sin City and Atlantic City to bounce back. On the other side of those trades were loan and bondholders-cutthroat hedge funds-who believed that they held the cards . . . the company's two dozen casinos now belonged to them. The spectacular 2015 bankruptcy of America's biggest gaming empire, started a two-year knockdown, drag-out brawl among billionaires-deftly narrated by the authors-for rightful control of Caesars Entertainment.

This is modern Wall Street where the new raiders and barbarians scoop up corporate loans and bonds not to make a nice interest rate but to take private equity juggernauts head-on. It's cut-throat, multilevel competition enacted by powerful investors used to getting their own way. And as this book takes the consequences one step further, there are devastating, true impacts of the upheaval wrought by these actions. It's a treacherous game. Roll the dice.
Praise for The Caesars Palace Coup

The strength of [The Caesars Palace Coup] is its vivid, behind-the-scenes footage of the insiders who now dominate the largest corporate bankruptcy cases, vignettes that will enliven many a law or business-school class in the next decade.
-Wall Street Journal

An investigative deep-dive into an old-fashioned casino heist, which includes a $31 billion leveraged buyout and a string of financial engineering transactions by Apollo Global Management and TPG Capital-all in the midst of the post-Great Recession slump, pitting private equity firms and distressed-debt hedge funds against each other in an ultimate poker match.
-Fortune

A casino caper and legal thriller rolled into one.... An eccentric Illinois judge, whose final ruling ultimately stunned bankruptcy aficionados, and the rantings from the Masters of the Universe make the book entertaining, maybe essential, reading across Wall Street.... The Caesars Palace Coup helps make clear what such Wall Street clashes are really about: men with big egos swinging their lacrosse sticks.

Lawyers and bankers duke it out in this thorough if dry history of the downfall of the Caesars Entertainment empire.... a welcome respite from stodgier case studies.
-Publishers Weekly

The Caesars Palace Coup is a superb inside account of what modern high finance is actually like-the strategies, the personalities, the relationships, the stress, and the shouting. Fascinating, suspenseful, and comprehensive, it is the Barbarians at the Gate of distressed debt.
-Matt Levine, Money Stuff columnist, Bloomberg Opinion

No story better captures early 21st century Wall Street like the bankruptcy of Caesars Entertainment. The Caesars Palace Coup is a well-researched, engaging modern-day corporate thriller, filled with epic courtroom and boardroom battles and the kinds of colorful characters that only exist on the buy-side. This is the fascinating inside story of a clash of the titans-the who's who of distressed hedge funds battling each other and private equity giants Apollo and TPG for their piece of the Las Vegas casino conglomerate. . . . [A] must read for anyone who loves the deals and the drama that so often characterize the ins and outs of Wall Street and corporate restructuring.
-Kristin Mugford, Harvard Business School

In The Caesars Palace Coup, two of Wall Street's most plugged-in journalists take us deep inside corporate raiding, 21st century style. Exploiting distressed debt instead of undervalued stock, buccaneer hedge funds and other vulture investors pay seventy, sixty, sometimes less than fifty cents on the dollar to scoop up controlling stakes in troubled companies. This breathtaking narrative culminates in bitter financial and courtroom warfare as Apollo Global Management, its allies, and its high-powered lawyers and lobbyists maneuver relentlessly against equally savvy investors to freeze them out of the resulting rise in profits and force them to accept a 'cramdown' settlement of their stakes in the company.
-Paul Steiger, former Wall Street Journal managing editor and founding editor of ProPublica

The distressed debt markets are the most rough-and-tumble corner of Wall Street, and Indap and Frumes have written the best book yet on the machinations, power moves, and personalities of the investors who make fortunes rolling the distressed debt dice.
-Jared A. Ellias, Bion M. Gregory Chair in Business Law, the University of California, Hastings

There is so much to like in this book. Its primary strength is its Law & Order backstory, peeling back the onion of every major player...Four years of painstaking personal interviews have paid off handsomely in this fascinating account of the inner workings of big money and big law reorganization practice.
-Jason Kilborn, Credit Slips