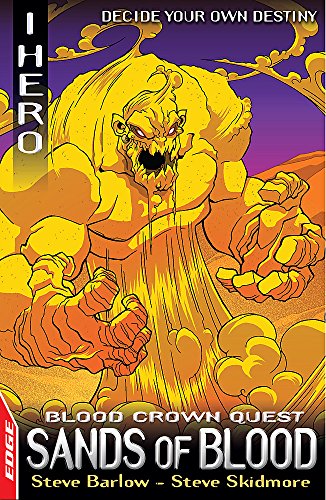 Hot spin-off from the I HERO series, YOU are pitted against the evil Red Queen and her dark minions as she attempts to collect four rubies to rebuild the Blood Crown. Written by the award-winning 2Steves!

We dare you to take on the Red Queen in this choose-your-own-destiny Blood Crown Quest!

The Red Queen has seized the Ruby of Death and raised an army of the dead.
Now, with her husband, the necromancer Mortha, they plan to find the remaining
three rubies and cast a permanent shadow over the world. YOU are a former City Guard,
a member of an elite unit of highly trained warriors. Your quest is to find the rubies
before the Red Queen. First you must return to the City of Alba from where you were banished...
You are the hero of this book. Only you can decide your own destiny...

Hot spin-off from the I HERO series, which has now sold over 80,000 copies! YOU are pitted against the evil Red Queen and her dark minions as she attempts to collect four rubies to rebuild the Blood Crown. Written by the award-winning 2Steves!

'A new interactive adventure series designed to encourage reluctant readers using carefully selected vocabulary and short paragraphs. Readers take the role of the hero and can decide their own destiny. With all the usual appeal of Barlow and Skidmore, this series is sure to be a big hit.' * Back to School Bookseller *
"As soon as one I Hero book reappears in the library it is snapped up within the hour." * G Trueman, Bath *

Steve Skidmore is shorter than Steve Barlow and less hairy. He was born in Birstall near Leicester in England. After managing to pass some exams at school, he went on to Nottingham University to supposedly read English, but spent most of his time playing sport and doing a variety of summer jobs including counting pastry pie lids 'yes, really'.
He trained as a teacher of Drama, English and Film studies, before teaming up with Steve Barlow to become a full time author.
He lives in Leicester and is a great rugby fan 'he supports Leicester Tigers - 'Come on you Tiiiiigeeeers!''. Steve Barlow was born in Britain 'in Crewe, in the county of Cheshire'. He went to Brierley Street School, which was like Bash Street only not as sophisticated, then to Crewe County Grammar School for Boys 'and what kind of school feels the need, in its name, to remind its pupils what gender they are? Hmmm?'. He went on to study at Warwick University and Nottingham University, and worked at various times as a teacher, actor, stage manager and puppeteer. Then he went to teach in Botswana, where a valid excuse for students not handing in their homework was 'A goat ate it, sir!'. On his return to the UK he met Steve Skidmore, and the rest is hysteria.