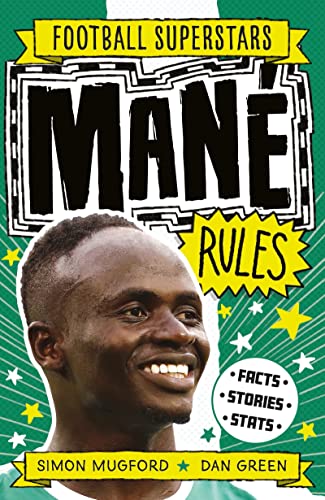 Everything the young fan needs to know about Sadio Mane.

Filled with quizzes, stats and little-known facts, plus illustrated and told with all the fun of a Tom Gates novel, the Football Superstars series is perfect for young readers five and up.

Is Sadio Mane your ultimate football hero? He was part of the Liverpool side that won the Champions League in 2019 and then the EPL in 2020. Mane also played for the Senegalese national team, helping them reach the quarter finals in the 2012 Olympic tournament. He played for the national team at the 2015 and 2017 Africa Cup of Nations as well.

Growing up in a poor family in the small village of Bambali, he was inspired to become a footballer after he saw his country's performance at the 2002 World Cup. He used to play with his neighbours in the streets full of dust. Now Mane is the mainstay of Liverpool's attack line. Together with Mohamed Salah and Roberto Firmino, he successfully forms a deadly trio.

The Football Superstars series is aimed at building a love of reading from a young age, with fun cartoons, inspirational stories, a simple narrative style and a cast of characters chipping in with quotes, jokes and comments.

After studying the history of everything at Goldsmiths College, Simon worked at the Science Museum making paper aeroplanes and setting fire to hydrogen balloons. Despite being a fully grown man, his favourite subjects include dinosaurs, robots, rockets, loud music and Star Wars. An Ipswich Town fan since they won the FA Cup in 1978 (it's true - look it up) he lives in Kent with his wife, daughter, and a cat with two names. Dan Green draws and writes books about stuff like trucks, space, people's jobs, Doctor Who, Star Wars and famous footballers.