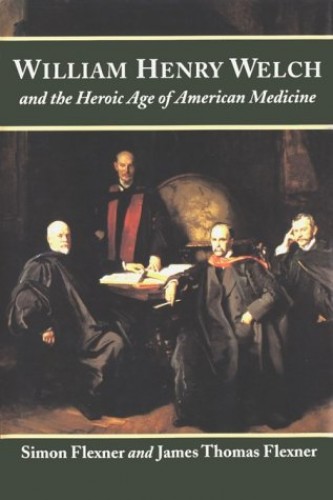 Welch won international fame as an authority on medical issues during American medicine's heroic age, when medical training and practice underwent revolutionary change. This book was originally published in 1941, by which time Welch had set the standards in American medical education.

During American medicine's Heroic Age, when medical training and practice underwent revolutionary change, William Henry Welch emerged as a singular, revolutionary hero. The first full-time faculty member at the Johns Hopkins University School of Medicine, he became the undisputed leader of American scientific medicine and the greatest shaping force in American medical education. He won international fame as America's preeminent authority on medical issues-our greatest statesman in the field of public health, in the words of Herbert Hoover-and earned the enduring affection of generations of colleagues and students as Popsy, a brilliant, charming, and dedicated mentor.

William Henry Welch and the Heroic Age of American Medicine was originally published in 1941. By then Welch-who died in 1934 at age 84-was already a legend. He had founded the country's first pathological laboratory at the Bellevue Hospital Medical College. His radical innovations at the new Johns Hopkins School of Medicine had become the standard in American medical education: high entrance requirements, instruction in the laboratory, emphasis on basic science, and fostering of research. His vision had shaped a variety of other important institutions, including the Rockefeller Institute, the Association of American Physicians, Peking Union Medical College, and the country's first school of public health and hygiene, established at Johns Hopkins largely through his efforts. Welch's eightieth birthday had been celebrated nationally, with ceremonies in Washington, D.C., attended by President Hoover and broadcast around the world.

A well-written biography... [and] a good read... It is basically the background of modern medicine in the United States. It explains the curriculum that physicians encountered in medical school. Most importantly, this 50-year old gem does it with style. Maryland Medical Journal

Foreword to the 1993 Johns Hopkins Edition
Chapter 1. The Dean of American Medicine
Chapter 2. Shadows Cast Before
Chapter 3. A Quiet Youth and a Crisis
Chapter 4. Lure of the Classics at Yale
Chapter 5. Convert to Medicine
Chapter 6. The Great Awakening
Chapter 7. Struggles in New York
Chapter 8. The Revelation of Bacteriology
Chapter 9. Laboratory Years
Chapter 10. Research in Medicine
Chapter 11. The Johns Hopkins Medical Schoo.
Chapter 12. The Public Arena
Chapter 13. The Rockefeller Institute for Medical Research
Chapter 14. Science at the Bedside
Chapter 15. Tragedies and Triumphs
Chapter 16. The Health of the Nation
Chapter 17. War and the Building of Peace
Chapter 18. Across the Pacific
Chapter 19. History of Medicine
Chapter 20. Last Adventures
Appendix A. Acknowledgments
Appendix B. Organizations and Honours
Appendix C. Notes to the Text
Index