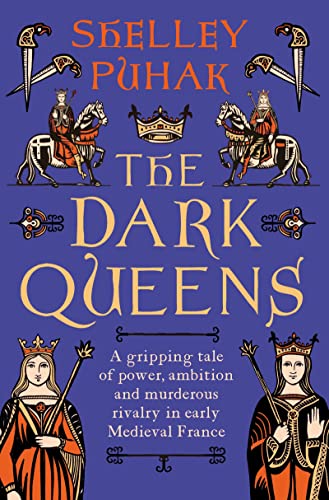 Brunhild was a Visigothic princess, raised to be married off for the sake of alliance-building. Her sister-in-law Fredegund started out as a lowly palace slave. And yet - in sixth-century Merovingian France, where women were excluded from noble succession and royal politics was a blood sport - these two iron-willed strategists reigned over vast realms for decades. The two queens commanded armies, developed taxation policies, established infrastructure and negotiated with emperors and popes, all the time fighting a gruelling forty-year civil war with each other. Yet after Brunhild and Fredegund's deaths, their names were consigned to slander and legend.

From the tangled primary evidence of Merovingian sources, award-winning writer Shelley Puhak weaves a gripping and intricate tale, its characters driven by ambition, lust and jealousy to acts of treachery and murderous violence. The Dark Queens resurrects these two women in all their complexity, painting a richly detailed portrait of a shadowy era and dispelling some of the stubbornest myths about female power.

'The Dark Queens brings the Merovingian empire to thrilling, bewildering, horrifying life. This is the story - told with a sharp eye, at heart-pounding pace - of two extraordinary women who held power in a brutal world that believed their sex couldn't rule. Many scholars 'still don't know what to do' with Brunhild and Fredegund. Shelley Puhak does' -- Helen Castor
'Bright, smart, and playful, The Dark Queens is a marvelous trip into the murky early Middle Ages. Shelley Puhak presents a believable and vividly drawn portrait of the Frankish world, and in doing so restores two half-forgotten and much-mythologized queens, Brunhild and Fredegund, to their proper place in medieval history' -- Dan Jones
'On the one hand, a story of scheming and savagery to make Game of Thrones look tame - on the other, a genuinely important exploration of the relationship between two powerful women, written with zest and verve' -- Sarah Gristwood
'History owes more to Brunhild and Fredegund, two queens whose bitter rivalry left a trail of bodies in their wake, than the lies perpetuated by their enemies. So bravo to Shelley Puhak for a remarkable piece of detective work, by turns enlightening and shocking. Anyone who thought that medieval queens spent their time sewing and sighing is in for a surprise' -- Amanda Foreman
'A vivid and engaging tapestry of Merovingian plot and counterplot' -- Max Adams
'This gripping saga features everything from gory murders to scandalous nuns. Brunhild and Fredegund are often flattened into early medieval Europe's great villains, but in Shelley Puhak's brilliant telling, they come to rich and nuanced life' -- Emma Southon
'A well-researched and well-told epic history. The Dark Queens brings these courageous, flawed, and ruthless rulers and their distant times back to life' -- Margot Lee Shetterly
'A compelling read for those with an interest in early medieval European history, Merovingian history, and women in power' * Library Journal *
'A lyrical and astute assessment of the political maneuvers, battlefield strategies, and resilience of medieval queens and rivals Fredegund and Brunhild... Puhak skillfully draws on contemporaneous sources, including letters, poems, and a vividly told yet obviously biased account by Brunhild's devoted ally, Bishop Gregory of Tours, to create her thrilling history. The resulting is a deeply fascinating portrait of the early Middle Ages that vigorously reclaims two powerhouse women from obscurity' * Publishers Weekly *
'Engaging... Fast-paced and intriguing' * Booklist *
'This is a book that will appeal not only to those with an interest in the Middle Ages, but anyone who loves the cut-and-thrust of court politics and ambition laid bare' * All About History *
'Fredegund and Brunhild were clearly extraordinary women. In Puhak, they have finally found a worthy champion' * Literary Review *
'Complete with maps, illustrations and a cast of characters, this is a vibrant exploration of these complex individuals, their world, and their legacy' * BBC History Revealed *
'Eventful plot, entertaining style and historical credibility' * TLS *
'A gripping tale of power, ambition and murderous rivalry in early medieval France' * The Critic *
Shelley Puhak is a poet and writer whose work engages with history in unexpected ways. She has more than a decade of experience teaching literature and creative writing and is the author of two award-winning books of poetry, Guinevere in Baltimore and Stalin in Aruba. Shelley's writing has appeared in publications including The Atlantic, Creative Nonfiction and Virginia Quarterly Review, been anthologised in Best American Travel Writing, and featured in numerous editions of Best American Essays. The Dark Queens is her first non-fiction book.
GOR012210253
9781801109154
180110915X
The Dark Queens: A gripping tale of power, ambition and murderous rivalry in early medieval France Shelley Puhak
Shelley Puhak
Gebraucht - Sehr Gut
Gebundene Ausgabe
Head of Zeus
20220303
336
N/A
Die Abbildung des Buches dient nur Illustrationszwecken, die tatsächliche Bindung, das Cover und die Auflage können sich davon unterscheiden.
Dies ist ein gebrauchtes Buch. Es wurde schon einmal gelesen und weist von der früheren Nutzung Gebrauchsspuren auf. Wir gehen davon aus, dass es im Großen und Ganzen in einem sehr guten Zustand ist. Sollten Sie jedoch nicht vollständig zufrieden sein, setzen Sie sich bitte mit uns in Verbindung.