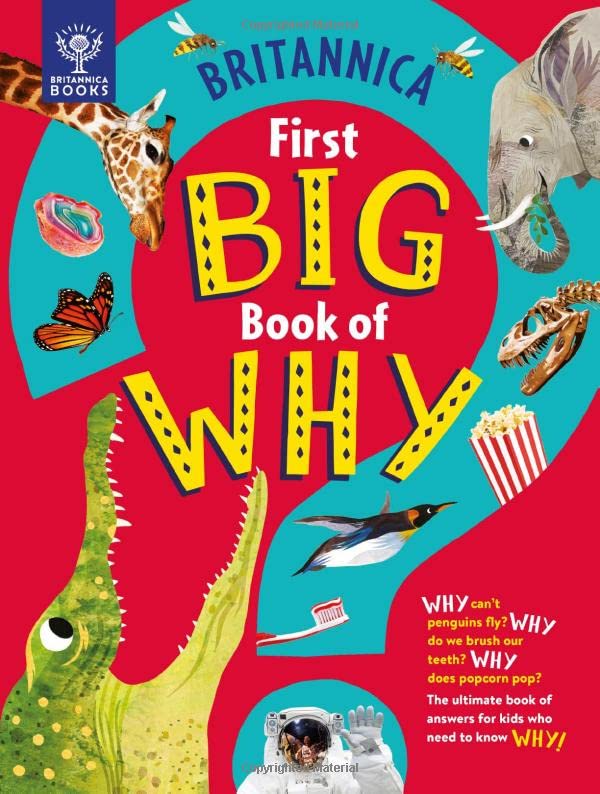 The definitive and stunningly illustrated question and answer book from Britannica, with answers to more than 100 questions that kids really want to know.

Britannica First Big Book of Why: Why can't penguins fly? Why do we brush our teeth? Why does popcorn pop? The ultimate book of answers for kids who need to know WHY! Sally Symes

Why do elephants have trunks? Why are clouds different shapes? Why does popcorn pop? Why does my tummy rumble? Why do we flush the toilet? This magnificent book features chapters on Bugs, Pets, Wild Animals, the Body, Food, Machines and Space and also includes some of the mysteries which experts are still trying to solve! By encouraging children to question how the world works, Britannica First Big Book of Why supports STEAM learning and nurtures enquiring minds. With stunning photography and gorgeous original illustrations by Kate Slater, this is the ultimate gift for kids who need to know WHY.

Sally Symes worked for many years as a designer of children's books before turning her skills to writing them. Her collaborations with Nick Sharratt have won several awards, including The Educational Writers' Award for The Gooey, Chewy, Rumble, Plop, and The Southampton Favourite Book to Share Award for Something Beginning with Blue. She works from a shed in Sussex, UK, accompanied by her grumpy cat.

Stephanie Drimmer writes books, magazine features, and online pieces for kids. She is a regular contributor to the Scholastic magazines SuperScience and Science World. Her column for National Geographic Kids magazine, Destination Space, follows a future astronaut as she visits the most bizarre places in the universe. Her work has also appeared in Muse, Popular Science and Popular Mechanics magazines, and in videos for TED-ed. She lives in Los Angeles, California, USA.

Kate Slater grew up on a beautiful farm in deepest Staffordshire, and studied illustration at Kingston University. Her children's books include: A is for Ant, The Birthday Crown, The Little Red Hen, ABC London, Magpie's Treasure, Make Your Own Birds of Prey and Make Your Own Flying Machines. Alongside work for publishing, editorial and advertising, she has created several large-scale installations and window displays.

Britannica Group is a global education leader with over 250 years of dedication to seeking out facts and providing insight into the mysteries of the universe. Britannica's mission to inspire curiosity and the joy of learning helps build the world's future thinkers and innovators.