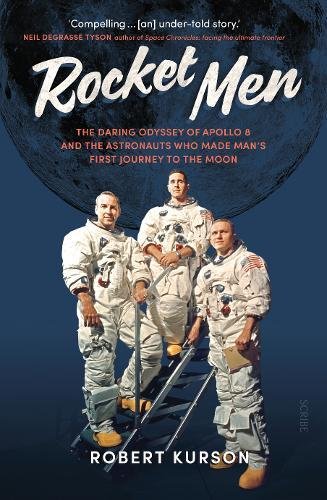 Rocket Men: the daring odyssey of Apollo 8 and the astronauts who made man's first journey to the moon Robert Kurson

An Economist book of the year.

Fifty years ago, Christmas 1968, Man first orbited the Moon. This book tells the inside story of that epic journey.

In early 1968, the Apollo programme was on shaky footing. President Kennedy's end-of-decade deadline to put a man on the Moon was in jeopardy, and the Soviets were threatening to pull ahead in the space race.

By August 1968, with its back against the wall, NASA decided to scrap its usual methodical approach and shoot for the heavens. With just four months to prepare, the agency would send the first men in history to the Moon.

Focusing on three heroic astronauts and their families, this vivid, gripping narrative shows anew the epic danger and singular bravery it took for Man to leave Earth for the first time - and to arrive at a new world.

'Rocket Men is a timely and thrilling reminder of a heroic American achievement - three dashing astronauts and the first rendezvous with the moon. It has it all - suspense, drama, risk and loving families. We could use those days again.'

'In 1968 we sent men to the Moon. They didn't leave bootprints, but it was the first time humans ever left Earth for another destination. That mission was Apollo 8. And Rocket Men, under Robert Kurson's compelling narrative, is that under-told story.'

'Robert Kurson takes us on mankind's first trip to the moon in 1968, another time when it seemed America was tearing itself apart. But on Christmas Eve, we raised our eyes skyward and were inspired by the bravery and eloquence of the three Apollo 8 astronauts as they orbited the moon and reminded us of our common humanity.'

'This is the story of the most consequential and daring voyage since those in the era of Columbus, the Apollo 8 mission to the moon. The tale is told with the care and clarity, and the heart-banging drama, that Robert Kurson's legion of readers have come to expect from him. A flat-out terrific book.'

'As a Rocket Woman myself, I know very well the story of Apollo 8, and yet I couldn't put this book down ... Kurson presents not only the challenges, risks, ambition, and success of Apollo 8, but a story of human spirit.'

'With Rocket Men, Robert Kurson tells the tale of Apollo 8 with novelistic detail and immediacy, expertly capturing the urgency and suspense behind the mission that gave America the lead in the Space Race.'

'Gripping ... Space buffs will enjoy this accessible and engaging account of human ingenuity and exploration.'

'Rocket Men is a riveting introduction to the [Apollo 8] flight ... Kurson details the mission in crisp, suspenseful scenes ... [A] gripping book.'

'Spectacular ... [Rocket Men] carries on in great style through 350-some pages of "daring, adventure, risk-taking" and so much more ... Kurson's portraits of the men, as well as their wives, their families and space-program colleagues, are intimate and artfully drawn.'

'Refreshing ... The book will bring long-deserved attention to a mission that has been overshadowed ... Apollo 8's success not only salvaged the space program but also managed to relieve the pessimism regarding the future into which the country had plunged.'

'Kurson's first-rate account of this remarkable spaceflight starts by reminding us what a gamble it was, a revelatory wake-up nudge for anyone who thinks moon flights were routine ... There are many pieces to the Apollo 8 story, but Kurson brings them together effortlessly.'

'Rocket Men is close-to-the-bone adventure-telling on a par with Alfred Lansing's Endurance and Jon Krakauer's Into Thin Air. It's as close to a movie as writing gets.'

'Robert Kurson has carried out meticulous research, including long interviews with Apollo 8's crew, as well as Mission Control staff. His account of the Apollo 8 mission, 50 years ago this December, comes to life in such detail that it reads like a page-turning thriller.' FIVE STARS

'A ripping account of the 1968 voyage into the little known ... Kurson has captured it well. Like Apollo 8, it is mission accomplished.'

'Kurson effectively recreates the era, recalling the tumult of a changing nation, as well as the tension felt by those involved both on Earth and in space, of a mission with little margin for error. Kurson writes in clear, simple language, avoiding technical matters and cryptic NASA jargon to focus on the people involved. Fans of explorers and adventurers will enjoy Kurson's vibrant, accessible history.'

'Kurson's conception-to-splashdown reporting had the cooperation from the astronauts and their wives, giving him invaluable details of what happened inside the astronaut's capsule and in their homes below. Most readers already know how the mission turned out (success!), but Kurson builds suspense around a mind-bendingly complex and dangerous journey.'

'The book, and the mission itself, offer a reminder that sometimes science fiction becomes science fact, if not necessarily the way we envisioned it.'

'A gripping account of Apollo 8, the first manned space flight around the Moon. The story of the dangerous mission that laid the ground for the Moon landing has not been told in such detail until now.'

'This is no dry technical story. It is a story of man's ingenuity and determination ... the story of this first space flight to the moon is an intriguing one. Fifty years on their achievements deserve to be better known and applauded.'