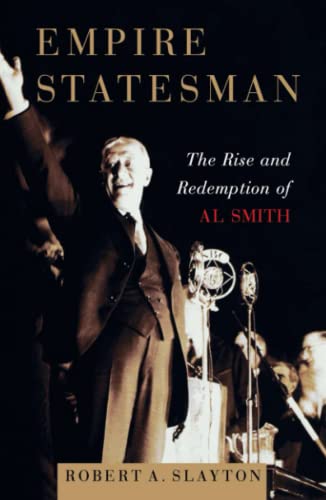 Empire Statesman: The Rise and Redemption of Al Smith Robert A. Slayton

Franklin Roosevelt is said to have explained Al Smith, and his own New Deal, with these words: "Practically all the things we've done in the federal government are the things Al Smith did as governor of New York." Smith, who ran for president in 1928, not only set the model for FDR, he also taught America that the promise of the country extends to everyone and no one should be left behind.

The story of this trailblazer is the story of America in the twentieth century. A child of second-generation immigrants, a boy self-educated on the streets of the nation's largest city, he went on to become the greatest governor in the history of New York; a national leader and symbol to immigrants, Catholics, and the Irish; and in 1928 the first Catholic major-party candidate for president. He was the man who championed safe working conditions in the wake of the Triangle Shirtwaist fire. He helped build the Empire State Building. Above all, he was a national model, both for his time and for ours.

Yet, as Robert Slayton demonstrates in this rich story of an extraordinary man and his times, Al Smith's life etched a conflict still unresolved today. Who is a legitimate American? The question should never be asked, yet we can never seem to put it behind us. In the early years of the twentieth century, the Ku Klux Klan reorganized, not to oppose blacks, but rather against the flood of new immigrants arriving from southern Europe and other less familiar sources. Anti-Catholic hatred was on the rise, mixed up with strong feelings about prohibition and tensions between towns and cities. The conflict reached its apogee when Smith ran for president. Slayton's story of the famous election of 1928, in which Smith lost amid a blizzard of blind bigotry, is chilling reading for Americans of all faiths. Yet Smith's eventual redemption, and the recovery of his deepest values, shines as a triumph of spirit over the greatest of adversity.

Even in our corrosively cynical times, the greater vision of Al Smith's life inspires and uplifts us.
Harold Evans

author of "The American Century"

Rich and relevant: Robert Slayton's portrait of the colorful and appealing Al Smith is rich in new detail -- and very relevant to the political controversies of today. The 'Happy Warrior' nominated by FDR for the Democratic ticket in 1924 (and again in 1928), New York Governor Smith was a populist Catholic who confronted the KKK bigots with tolerance, integrity, and humor, long before John F. Kennedy finally exorcised the anti-Catholic demons from American politics...or did he? An America in search of heroes will find sustenance in this honorable man of the city. Al Smith was one of those people who make a reality of American ideals.

author of "Erin's Daughters in America"

Robert Slayton has presented readers with a 'real American hero' and with an exemplary biographical narrative. The Al Smith who jumps out of these pages is a paradigm of urban America, someone who had been shaped by its streets, and who dedicated his public life to making them livable for all.

Alfred Emanuel Smith: the name once had a resonance. It stood for inclusion, for immigrant hope of assimilation, for the fulfillment of the dream vision of America -- a country without bigotry, your land and mine. In defeat Al Smith meant more to Americans than all but the great presidents have meant in victory, and in this needed reinterpretation of Smith, Robert Slayton shows us why.

author of "The Power Broker: Robert Moses" and "the Fall of New York"

At last! Here is a book, vivid and insightful, that finally rescues from obscurity a man who deserves a major place in American political history. From the glory of his governorship to the tragedy of his final years, here he is -- the Happy Warrior.

author of "The Irish in America"

Robert Slayton reminds us why Al Smith is one of America's great political heroes. With great affection, Slayton tells the story of a man who worked his way up from poverty, but who never forgot the immigrants and their children in the old neighborhood. Robert Slayton has given us a touching portrait of an honorable man who showed that government could make a difference in the lives of the poor, the powerless, and the disenfranchised. What an antidote for today's corrosive cynicism about politics and politicians!

Robert A. Slayton is Associate Professor of history at Chapman University. A New Yorker by birth, he is the author of Back of the Yards: The Making of a Local Democracy and New Homeless and Old: Community and the Skid Row Hotel. He lives in Orange County, California.
Contents

Part I: Coming of Age

CHAPTER 1. The Sidewalks of New York

CHAPTER 13. The Sound of the Siren

CHAPTER 18. And the Pope Will Move to Washington

CHAPTER 22. Mr. Smith Does Not Go to Washington