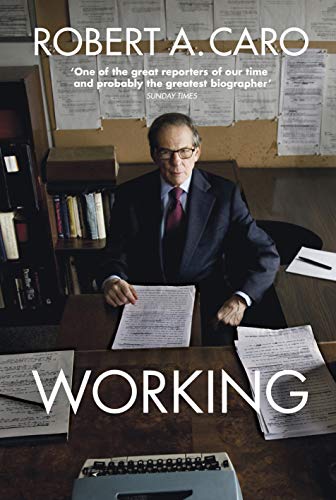 Robert A. Caro, 'one of the great reporters of our time and probably the greatest biographer' (Sunday Times), is one of the most acclaimed writers of his generation, whose biographies are widely considered to be masterpieces.

In Working he offers a captivating account of his life as a writer, describing the sometimes staggering lengths to which he has gone in order to produce his books and offering priceless insights into the art and craft of non-fiction writing.

Anyone interested in investigative journalism and the pursuit of truth, in the writer's process and the creation of literature, in the art of interviewing or simply the psychology of excellence will find a masterclass in all these subjects within these pages. Readers already familiar with Caro's work, meanwhile, will be thrilled at the revelations on offer, including how he discovered the fiercely guarded secrets of his subjects, how he constructed the pivotal scenes in his books and the fullest description yet of his forthcoming final volume of The Years of Lyndon Johnson.

Including several of Caro's most famous speeches and interviews alongside the new material, Working is the self-portrait of a man who knows the meaning and importance of great story-telling. It is, like all his books, an utterly riveting example of that too.

One of the greatest non-fiction works ever written -- Bryan Appleyard, Sunday Times, on The Power Broker
Irresistibly readable, an outright masterpiece -- David Sexton, Evening Standard, on The Power Broker
A stupendous achievement ... Caro's style is gripping, indeed hypnotic, and he squeezes every ounce of drama from his remarkable story -- Vernon Bogdanor, Independent, on The Power Broker
I think about Robert Caro and reading The Power Broker back when I was twenty-two years old and just being mesmerized -- Barack Obama on The Power Broker
A breathtakingly dramatic story [told] with consummate artistry and ardor ... It showcases Mr Caro's masterly gifts as a writer -- Michiko Kakutani, The New York Times, on The Years of Lyndon Johnson
My book of the year, by a landslide majority ... The adjective 'Shakespearean' is overused and mostly undeserved but not in this case -- Robert Harris, Guardian, on The Years of Lyndon Johnson
Regarded by many as the greatest political biography of the modern era -- The Times on The Years of Lyndon Johnson
Riveting -- Kathleen Burk * History Today, *Books of the Year* *
Charming, inspiring and still at it; if you've ever wanted to know how a great write does it, you have reached your destination. * Strong Words, *Books of the Year* *
Robert A. Caro's first book, The Power Broker, published in 1974, was described in 2015 as 'one of the greatest non-fiction works ever written' (Sunday Times). His ongoing multi-volume work The Years of Lyndon Johnson has been described as 'the greatest biography of our era' (The Times). With these books he has twice won the Pulitzer Prize, twice won the National Book Award and three times won the National Book Critic's Circle Award. He has also been awarded virtually every other major literary honor, including the National Humanities Medal, awarded by President Barack Obama, the highest award in the humanities given in the United States. Born in 1935, he graduated from Princeton University, later became a Nieman Fellow at Harvard University, and was an investigative reporter for Newsday for six years. He lives with his wife, the writer Ina Caro, in New York City, where he is at work on the fifth and final volume of The Years of Lyndon Johnson.
GOR009872817
9781847926050
1847926053
Working: Researching, Interviewing, Writing Robert A Caro
Robert A Caro
Gebraucht - Sehr Gut
Gebundene Ausgabe
Vintage Publishing
2019-04-16
240
N/A
Die Abbildung des Buches dient nur Illustrationszwecken, die tatsächliche Bindung, das Cover und die Auflage können sich davon unterscheiden.
Dies ist ein gebrauchtes Buch. Es wurde schon einmal gelesen und weist von der früheren Nutzung Gebrauchsspuren auf. Wir gehen davon aus, dass es im Großen und Ganzen in einem sehr guten Zustand ist. Sollten Sie jedoch nicht vollständig zufrieden sein, setzen Sie sich bitte mit uns in Verbindung.