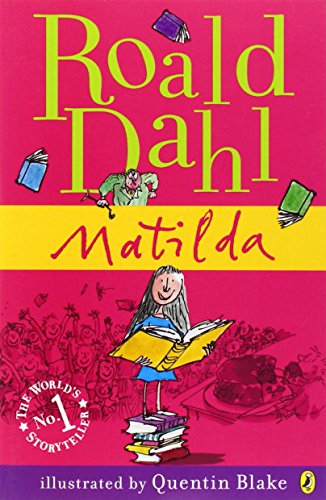 Matilda invents a game of punishing her parents when they treat her badly. She soon discovers that she has supernatural powers.

Matilda is one of Roald Dahl's most magical stories!

Matilda Wormwood's father is a mean crooked crook. And her mother's just plain stupid. They think Matilda is a nuisance who should watch more TV and read fewer books! But her lovely teacher Miss Honey thinks Matilda is a genius. Matilda has a few extraordinary tricks up her sleeve, so her horrible parents and even more horrible headmistress had better watch out.

A true genius . . . Roald Dahl is my hero David Walliams

***Adapted for stage in 2011 into an award-winning musical by Tim Minchin.***

Roald Dahl, the best-loved of children's writers, was born in Wales of Norwegian parents. After school in England he went to work for Shell in Africa. He began to write after a monumental bash on the head, sustained as an RAF pilot in World War II. Roald Dahl died in 1990.

Quentin Blake is one of the best-known and best-loved children's illustrators and it's impossible now to think of Roald Dahl's writings without imagining Quentin Blake's illustrations.