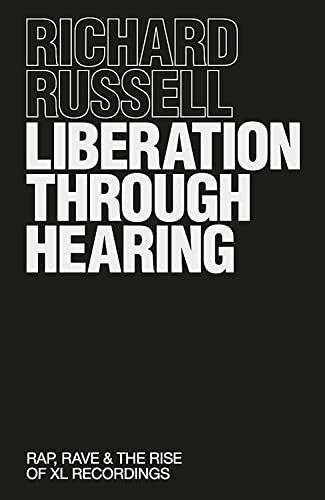 The story of XL Recordings, the UK's leading independent record label, told through the life, and in the words of its owner, Richard Russell
'A fascinating read' Damon Albarn

'If sound is the fifth element, then Richard has nurtured and enhanced some of the most important soundwaves of our time' M.I.A

'Taking us from the rap 80s to the rave 90s into the grimy 21st century, Richard Russell is a Firestarter in his own right and his story is a riveting adventure' Simon Reynolds

'Russell reveals his forensic love of music and its strategies. A fascinating read' Damon Albarn

When I stopped wanting things for the wrong reasons, they became possible.

For almost 30 years as label boss, producer, and talent conductor at XL Recordings, Richard Russell has discovered, shaped and nurtured the artists who have rewritten the musical dictionary of the 21st century, artists like The Prodigy, The White Stripes, Adele, M.I.A., Dizzee Rascal and Giggs. Growing up in north London in thrall to the raw energy of '80s US hip hop, Russell emerged as one part of rave outfit Kicks Like a Mule in 1991 at a moment when new technology enabled a truly punk aesthetic on the fledgling free party scene. For most of the 90s identified with breakbeat and hardcore, Russell's stewardship at the label was always uncompromising and open to radical influences rather than conventional business decisions.

Liberation through Hearing tells the remarkable story of XL Recordings and their three decades on the frontline of innovation in music; the eclectic chorus of artists who came to define the label's unique aesthetic, and Russell's own story; his highs and lows steering the fortunes of an independent label in a rapidly changing industry, his celebrated work with Bobby Womack and Gil Scot Heron on their late-career masterpieces, and his own development as a musician in Everything is Recorded.

Always searching for new sounds and new truths, Liberation through Hearing is a portrait of a man who believes in the spiritual power of music to change reality. It is also the story of a label that refused to be categorised by genre and in the process cut an idiosyncratic groove which was often underground in feel but mainstream in impact.

I love XL. I use them as an example of how a brand is built. On great taste -- Jay Z
Russell reveals his forensic love of music and its strategies. A fascinating read -- Damon Albarn
Richard Russell's vision as a producer and guru to countless artists has always been progressive. This memoir is required reading for anyone who cares about the recent history of British music -- Gilles Peterson
If sound is the fifth element, then Richard has nurtured and enhanced some of the most important soundwaves of our time -- M.I.A
Taking us from the rap 80s to the rave 90s into the grimy 21st century, Richard Russell isa Firestarter in his own right and his story is a riveting adventure -- Simon Reynolds
Rich is the fucking boss. Man has no shoes on -- Giggs
The music business is full of kneejerk hyperbole, but XL Recordings, the independent London label run by Richard Russell, remains the most extraordinary enterprise ... a refreshing account of how a tremendously successful record aficionado gradually worked his way round to a kind of Zen humility -- Kitty Empire * Observer *
Richard Russell (b. 1971) is a British record producer, musician and the owner of the British record label XL Recordings. He has nurtured and guided some of the most influential recording artists of our time including Adele, Dizzee Rascal, The Prodigy, M.I.A. and Giggs. As a producer and musician, Russell has made albums with the likes of Gil Scott-Heron, Bobby Womack, Damon Albarn and Ibeyi and most recently launched his own artist project Everything Is Recorded, whose self-titled debut album was nominated for the 2018 Mercury Music Prize.
GOR011640871
9781474616331
147461633X
Liberation Through Hearing Richard Russell
Richard Russell
Gebraucht - Gut Gelesen
Gebundene Ausgabe
Orion Publishing Co
2020-04-02
368
N/A
Die Abbildung des Buches dient nur Illustrationszwecken, die tatsächliche Bindung, das Cover und die Auflage können sich davon unterscheiden.
Dies ist ein gebrauchtes Buch. Wir geben unser Bestes, Ihnen hochwertige Bücher anbieten zu können. Tatsache ist jedoch, dass dieses Buch schon einen Vorbesitzer hatte und bereits gelesen wurde. Es ist daher unvermeidbar, dass es Gebrauchsspuren aufweist. Möglicherweise handelt es sich auch um ein ehemaliges Bibliotheksbuch.