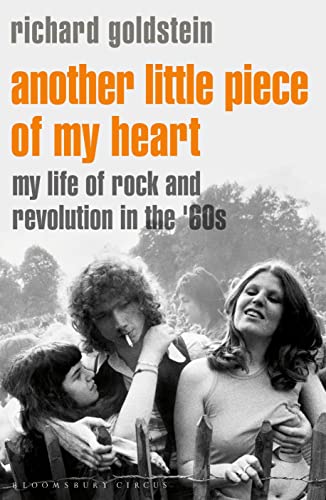 Another Little Piece of My Heart Richard Goldstein

Another Little Piece of My Heart: My Life of Rock and Revolution in the '60s Richard Goldstein

In 1966, at just twenty-two, Richard Goldstein approached the Village Voice with a novel idea. 'I want to be a rock critic,' he said. 'What's that?' the editor replied. It was a logical question, since rock criticism didn't yet exist. In the weekly column he would produce for the Voice, Goldstein became the first person to write regularly in a major publication about the music that was changing everyone's lives. He believed deeply in the power of rock, and, long before it was acceptable, he championed the idea that this music was a serious art form. From his unique position in journalism, Richard Goldstein witnessed the full arc of events that shaped culture and politics in the 1960s - and participated in them, too. He toured with Janis Joplin, spent a day at the Grateful Dead house in San Francisco, got stoned with Brian Wilson and the Beach Boys, and was in the front row when Jimi Hendrix burned his first guitar at the Monterey Pop Festival. He was present for Martin Luther King's 'I Have a Dream' speech, the student uprising at Columbia and the riots at the 1968 Democratic Convention. He was challenged to a boxing match by Norman Mailer and took Susan Sontag to her first disco. Goldstein developed close relationships with several rock legends - Janis Joplin and Jim Morrison, to name two - and their early deaths came each time as a wrenching shock, fuelling his disillusionment as he watched the music he loved rapidly evolve from a communal rite into a vast industry and felt the sense of hope for radical social upheaval fade away. Another Little Piece of My Heart is an intimate memoir of the writer as a young man. It is also a sweeping personal account that no one else could provide - a deeply moving, unparalleled document of rock and revolution in America.
As columnist for the Village Voice newspaper in New York, Richard Goldstein was in the vanguard of writing seriously about rock music at a time when most regarded it as disposable ephemera. His memoir (a curate's egg) is pithy and touching on the foibles of Sixties idealism and counterculture **** -- Mick Brown * Sunday Telegraph *
Writing about pop in the '60s and '70s was a brilliant new art form, and Richard Goldstein was one of the original artists. His Poetry of Rock was one of the books that made me want to be a rock critic * Paul Morley *
Richard Goldstein was the first rock critic worth reading. This book is a wonderful description of how it felt to change lives, including his own, in the '60s * Richard Williams *
A deeply felt and compelling portrait of an age that indelibly marked everyone who took part in it. Indispensable for understanding the culture of the '60s and the music that was at its heart * Kirkus *
This memoir provides unique views of some of the time's most colourful figures, including Janis Joplin, Jim Morrison, Susan Sontag, and Andy Warhol. But most of all, it shows us how one electric consciousness - Goldstein's own - emerged and evolved as America itself became new * Ann Powers *
A pithy memoir of the Sixties counterculture by a rock critic who saw beyond the hype ... A fond eulogy to misplaced idealism and expectations **** * Daily Telegraph *
His advantage as fan, street freak, political rad and literate academic distinguished him from trade and teen rag rats. Given this singularity, he invented his gig - and his description of the process is fascinating ... Interactions with John Lennon, Mick Jagger, Jim Morrison, Brian Wilson and - especially - his friendship with Janis Joplin bring the reader intimately into the time -- Michael Simmons * Mojo *
The book charts his transformation from a tubby, sexually-confused Jewish kid from the Bronx to a razor-tongued, silver-booted, reviewer-about-town, working for The Village Voice in New York and rubbing shoulders with Andy Warhol, John Lennon and Jimi Hendrix * Esquire *
The memoir pick through Goldstein's memories of the drug-enhanced hope and sourness of Sixties America and is particularly effective as his job put him in the centre of the youth movement. Unsurprisingly, it's very well written ***** * Western Mail *
Tinged with an autumnal sense of loss and the self-examination of a 70-year-old man looking back on his life ... As well as being very funny, Another Little Piece of My Heart is an affecting meditation on the author's "budding queerness" and acceptance, finally, that he was gay -- Ian Thomson * Independent *
Richard Goldstein is one of the founders of rock criticism, beginning with his 'Pope Eye' column in the Village Voice in 1966. His reporting led to a long career as a commentator on culture, politics and sexuality. His work has appeared in many publications, including the New York Times, Harpers, the Guardian and the Nation, and he served as arts editor and then executive editor of the the Village Voice. His gay activism earned him a GLAAD award as columnist of the year. His books include the bestselling The Poetry of Rock, Reporting the Counterculture and Homocons. He is currently an adjunct professor at Hunter College of the City University of New York.
GOR009227033
9781408858127
1408858126
Another Little Piece of My Heart: My Life of Rock and Revolution in the '60s Richard Goldstein
Richard Goldstein
Gebraucht - Sehr Gut
Broschiert
Bloomsbury Publishing PLC
2015-04-09
240
N/A
Die Abbildung des Buches dient nur Illustrationszwecken, die tatsächliche Bindung, das Cover und die Auflage können sich davon unterscheiden.
Dies ist ein gebrauchtes Buch. Es wurde schon einmal gelesen und weist von der früheren Nutzung Gebrauchsspuren auf. Wir gehen davon aus, dass es im Großen und Ganzen in einem sehr guten Zustand ist. Sollten Sie jedoch nicht vollständig zufrieden sein, setzen Sie sich bitte mit uns in Verbindung.