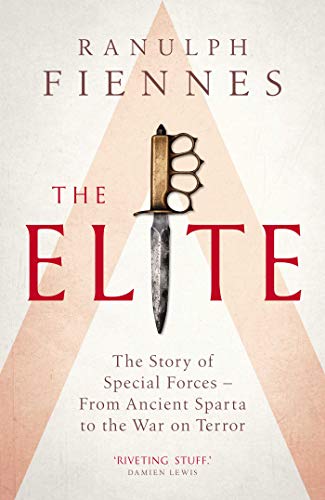 Five thousand years of military history. The best elite unites that have fought across the globe. Their story told by acclaimed adventurer and ex-SAS officer, Ranulph Fiennes.

The Elite: The Story of Special Forces - From Ancient Sparta to the War on Terror Ranulph Fiennes

"Riveting stuff. Through the prism of his experience of the military elite, Fiennes presents a dazzling history of the world's best fighting units to amaze and enthral the reader." Damien Lewis, Bestselling author of Zero Six Bravo

Inspired by the heroic war time escapades of his father, as well as drawing on his own experiences in the special forces, acclaimed adventurer Sir Ranulph Fiennes thrillingly explores the history of elite military units, from ancient Sparta to the War on Terror.

The best of the best, these elite units have frequently been immortalised on the big screen, and in computer games, for their daring deeds. Whether it be fighting on the battlefield, storming forts and castles, rescuing hostages, high stakes reconnaissance missions or the dramatic assassination of enemy leaders, these are the men who are relied upon to undertake dangerous missions of the highest stakes. While celebrating the heroics of groups such as the SAS and Navy Seals, Sir Ranulph also reveals the true stories of infamous organisations such as The Assassins and Templar Knights. Uncovering their origins, and examining their weapons and tactics, Sir Ranulph showcases these units most famous missions, and reveals the men behind them. Showing incredible courage, often in the face of impossible odds, these units have also changed the course of history along the way. Sir Ranulph discusses the reasons behind their success and failures, with many notorious conflicts often being decided by these elite units facing off against each other, with the victor not only evolving warfare, but also consigning their opponent to history.

While these units traditionally prefer to operate in the shadows, Sir Ranulph brings their remarkable histories to the fore, told with his trademark ability to weave a story which has seen him become one of Britain's most beloved bestselling authors.
"Riveting stuff. Through the prism of his experience of the military elite, Fiennes presents a dazzling history of the world's best fighting units to amaze and enthral the reader." -- Damien Lewis
Sir Ranulph Fiennes was the first man to reach both poles by surface travel and the first to cross the Antarctic Continent unsupported. In the 1960s he was removed from the SAS Regiment for misuse of explosives but, after joining the army of the Sultan of Oman, received that country's Bravery Medal on active service in 1971. He is the only person yet to have been awarded two clasps to the Polar medal for both Antarctic and the Arctic regions. Fiennes has led over thirty expeditions, including the first polar circumnavigation of the Earth, and in 2003 he ran seven marathons in seven days on seven continents in aid of the British Heart Foundation. In 1993 Her Majesty the Queen awarded Fiennes the Order of the British Empire (OBE) because, on the way to breaking records, he has raised over GBP14 million for charity. He was named Best Sportsman in the 2007 ITV Great Briton Awards and in 2009 he became the oldest Briton to reach the summit of Everest.
GOR010419727
9781471156625
1471156621
The Elite: The Story of Special Forces - From Ancient Sparta to the War on Terror Ranulph Fiennes
Ranulph Fiennes
Gebraucht - Sehr Gut
Broschiert
Simon & Schuster Ltd
2019-10-17
384
N/A
Die Abbildung des Buches dient nur Illustrationszwecken, die tatsächliche Bindung, das Cover und die Auflage können sich davon unterscheiden.
Dies ist ein gebrauchtes Buch. Es wurde schon einmal gelesen und weist von der früheren Nutzung Gebrauchsspuren auf. Wir gehen davon aus, dass es im Großen und Ganzen in einem sehr guten Zustand ist. Sollten Sie jedoch nicht vollständig zufrieden sein, setzen Sie sich bitte mit uns in Verbindung.