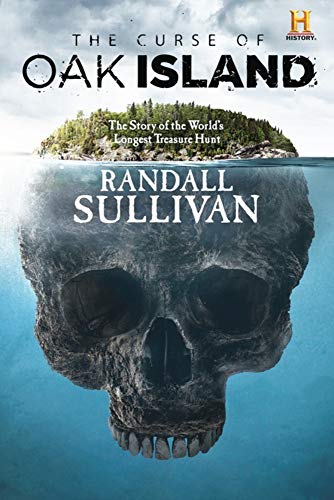 The Curse of Oak Island: The Story of the World's Longest Treasure Hunt Randall Sullivan

UPDATED WITH NEW MATERIAL FROM THE AUTHOR

In The Curse of Oak Island, longtime Rolling Stone contributing editor and journalist Randall Sullivan explored the curious history of Oak Island and the generations of people who tried and failed to unlock its secrets. Drawing on his exclusive access to Marty and Rick Lagina, stars of the History Channel's television show The Curse of Oak Island, Sullivan delivers an up to the minute chronicle of their ongoing search for the truth.

In 1795, a teenager discovered a mysterious circular depression in the ground on Oak Island, in Nova Scotia, Canada, and ignited rumors of buried treasure. Early excavators uncovered a clay-lined shaft containing layers of soil interspersed with wooden platforms, but when they reached a depth of ninety feet, water poured into the shaft and made further digging impossible.

Since then the mystery of Oak Island's Money Pit has enthralled generations of treasure hunters, including a Boston insurance salesman whose obsession ruined him; young Franklin Delano Roosevelt; and film star Errol Flynn. Perplexing discoveries have ignited explorers' imaginations: a flat stone inscribed in code; a flood tunnel draining from a man-made beach; a torn scrap of parchment; stone markers forming a huge cross. Swaths of the island were bulldozed looking for answers; excavation attempts have claimed two lives. Theories abound as to what's hidden on Oak Island. Could it be pirates' treasure or Marie Antoinette's lost jewels? Or perhaps the Holy Grail or proof of the identity of the true author of Shakespeare's plays?

In this rich, fascinating account, Sullivan takes readers along as the Lagina brothers mount the most comprehensive effort yet to crack the mystery, and chronicles the incredible history of the curse of Oak Island, where for two centuries dreams of buried treasure have led intrepid treasure hunters to sacrifice everything.

Praise for The Curse of Oak Island:

The Curse of Oak Island is a definitive read for fans of the History Channel television show. Sullivan delves deeper into the history, personalities, and theories presented only briefly on the show. His approach is mostly unbiased, though he does tell the reader his thoughts on some of the theories and the theorists that he thoroughly researches and debunks. The book is incredibly well researched and the presentation . . . is very readable. If you've watched The Curse of Oak Island and were frustrated that snippets and possibilities were left tantalizingly unexplored, this is the book for you. -Heather Cover, Homewood Library (Birmingham, Alabama)

Sullivan isn't writing about Oak Island the TV show; his subject is Oak Island the place, largely as seen and imagined by the show's viewers. So, if you've ever been more entranced by the show's long trips into history and theoretical island encounters across history, Sullivan's book probably needs to be on your Christmas list. -Starcasm

Compelling . . . No single source presents so complete or damning a record as LAbyrinth. -Entertainment Weekly on LAbyrinth

As a forceful author, Sullivan does a masterly job of juggling the dense thicket of facts and navigating the crowded chronology of the case. -Salon.com on LAbryinth

Sullivan's reportage is extraordinary, his narrative enthralling. -Rolling Stone on The Price of Experience

Worthy of F. Scott Fitzgerald, Sullivan captures the essence of the world in which Hunt and the BBC operated. -Chicago Tribune on The Price of Experience

A stunning mix of the personal and the historic, interviews and experiences, with Sullivan incredibly nimble at making the worlds overlap. -Booklist (starred review) on The Miracle Detective

RANDALL SULLIVAN was a contributing editor to Rolling Stone for over twenty years. His writing has also appeared in Esquire, Wired, Outside, Men's Journal, The Washington Post, and the Guardian. Sullivan is the author of The Price of Experience; LAbyrinth, which is the basis for the forthcoming feature film City of Lies; The Miracle Detective, the book that inspired the television show The Miracle Detectives, which Sullivan co-hosted and which premiered on the Oprah Winfrey Network (OWN) in January 2011; and Untouchable. He lives in Portland, Oregon.