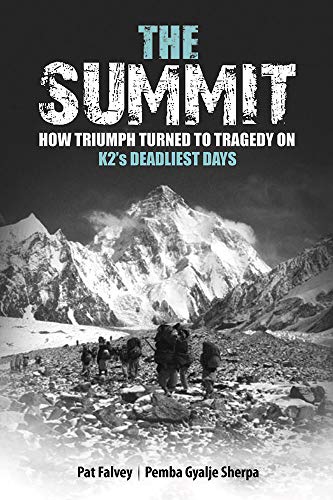 On 1 August 2008, thirty-four climbers from seven international expeditions joined forces in their attempt to reach the summit of K2. Tragedy struck and for three days Sherpa Pemba Gyalje and others tried to save the lives of those around them. A gripping eye-witness account of one of mountaineerings most controversial disasters.

The Summit: How Triumph Turned to Tragedy on K2's Deadliest Days Pat Falvey

On 1 August 2008, 18 climbers from across the world reached the summit of K2, the world's second highest and most dangerous mountain - a peak which claims the life of one in every four climbers who attempt it. Over the course of 28 hours, however, K2 had exacted a deadly toll: 11 lives were lost in a series of catastrophic accidents.

Attracting a climbing elite and standing at 8,611 metres on the Pakistan-China border, K2 is known as the 'Mountaineer's Mountain' because of its extreme technical challenges, its dangerously unpredictable weather and an infamous and hazardous overhanging wall of ice known as the Serac.

Snow-bound at Base Camp for weeks on end and increasingly despairing of their prospects of success, an unexpected weather window gave the climbers the opportunity they were waiting for. In their collective desire to reach the summit, seven expeditions agreed to co-ordinate their efforts and share their equipment. Triumph quickly turned to tragedy, however, when a seemingly flawless plan unravelled with lethal consequences.

Over the course of three days, a Nepalese Sherpa called Pemba Gyalje, along with five other Sherpas, was at the centre of a series of attempts to rescue climbers who had become trapped in the Death Zone, unable to escape its clutches and debilitated by oxygen deprivation, chronic fatigue, delirium and a terrifying hopelessness.

The tragedy became a controversy as the survivors walked from the catastrophe on the mountain into an international media storm, in which countless different stories emerged, some contradictory and many simply untrue.

Based on Pemba Gyalje's eyewitness account and drawing on a series of interviews with the survivors which were conducted for the award-winning documentary, The Summit (Image Now Films and Pat Falvey Productions, 2012), The Summit: How Triumph Turned to Tragedy on K2's Deadliest Days is the most comprehensive interpretation of one of modern-day mountaineering's most controversial disasters.

Pat Falvey is an Irish adventurer and mountaineer who has led expeditions to many parts of the world, including Everest, Antarctica, Greenland and West Papua New Guinea. He has twice been to each of the highest peaks on the seven continents. An author, motivational speaker and film maker, he is the executive producer of The Summit (Image Now Films and Pat Falvey Productions, 2012) which portrays on screen the story told in this book. Pat lives in County Kerry, near Ireland's highest mountain, Carrauntoohil. Pemba Gyalje Sherpa was born in northern Nepal and grew up in the shadow of Mount Everest. His experience as a professional mountain guide has taken him to the Alps and Himalaya, including to the summit of Everest on seven occasions. He is an IVBV/UIAGM/IFMGA-certified mountain guide since 2009 and is an expert in alpine rescue and climbing. For the past 13 years he has been a trainer in high-altitude mountaineering. He is the current president of the Nepal National Mountain Guide Association (NNMGA). In recognition of his heroism during the K2 tragedy, he was named the National Geographic Best Adventurer of 2008. Pemba lives in Kathmandu with his wife and two children.
GOR010147981
9781847176431
1847176437
The Summit: How Triumph Turned to Tragedy on K2's Deadliest Days Pat Falvey
Pat Falvey
Gebraucht - Gut
Gebundene Ausgabe
O'Brien Press Ltd
20131118
320
N/A
Die Abbildung des Buches dient nur Illustrationszwecken, die tatsächliche Bindung, das Cover und die Auflage können sich davon unterscheiden.
Dies ist ein gebrauchtes Buch. Es wurde schon einmal gelesen und weist von der früheren Nutzung Gebrauchsspuren auf. Wir gehen davon aus, dass es im Großen und Ganzen in einem guten Zustand ist. Sollten Sie jedoch nicht vollständig zufrieden sein, setzen Sie sich bitte mit uns in Verbindung.