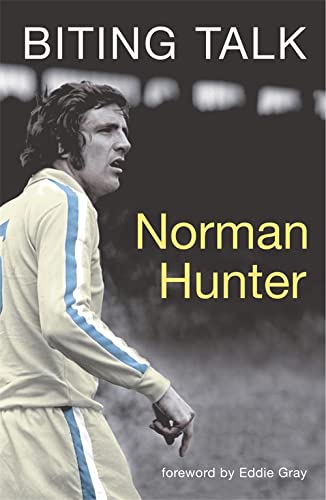 One of the greatest and most fearless footballers to play for England and Leeds tells his fascinating life story.

Norman Hunter was one of the greatest love-hate figures in football history. He played for Leeds during the 1960s and 1970s under the great Don Revie, earning himself the nickname 'Bites Yer Legs' due to his fierce tackling.

However, beneath the notorious reputation was a player of outstanding skill and talent; he won 28 caps for England and became the first ever footballer to achieve the Player of the Year award in 1973 from the Professional Footballers Association.

Norman Hunter talks candidly about what it was like to gain a reputation as one of football's hard men. He reveals how he was witness to one of the most controversial chapters in Leeds United's history, and recalls the stormy dressing room scenes that led up to Brian Clough's sacking after only 44 days.

Norman Hunter's fearless style in his playing days is reflected in his autobiography; his strong views and open recollections make for an intriguing story.

He is as fearless in his writing as he was when playing. * Yorkshire Post *

Norman Hunter began playing for Leeds in the 1962-63 season at the age of 18. He featured in all Leeds' cup finals from 1965 to 1975 and won 28 caps for England. His popularity continues today; in a recent poll carried out by Leeds United's official monthly magazine to find the 100 greatest ever Leeds players, Norman Hunter came sixth.
Norman Hunter is now a commentator for BBC Radio Leeds, and is known as the 'Voice of Leeds'.