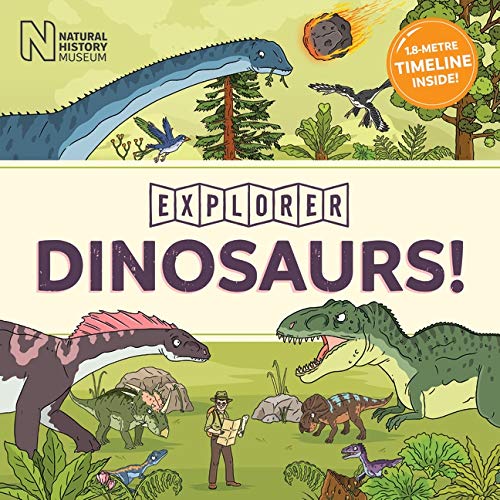 Unfold an epic 2-metre long timeline featuring more than 100 dinosaurs from their first appearance about 230 million years-ago through to their living descendants, the birds, today

Dig deep into the fascinating world of dinosaurs with the first book in the What on Earth Explorer series, complete with a 2-metre long fold-out timeline. Join explorer Agent Eagle as he explores these amazing creatures - from the earliest fossil discoveries to the relationship between birds and dinosaurs. Discover the history of the dinosaur, in each major era, emphasising how dinosaur bodies and diets adapted over time. Learn about the best places to find fossils, who are the great dinosaur explorers and scientists and ultimately, what killed off the dinosaurs. A quiz, name game and glossary lead you to the book's biggest feature - a fold-out timeline featuring 100 of the most incredible dinosaurs that ever lived - from their first appearance 230 million years ago, to their current living descendants. Full of facts and bursting with illustrations, Explorer: Dinosaurs! is a unique book for any dinosaur buff.

SILVER HONOR "An excellent resource for dino-dedicated kids, this new title in What on Earth Publishing's fold-out timeline series explores the history of dinosaurs, from their emergence in the Triassic period 240 million years ago through their eventual extinction...A worthwhile, informative, and fun resource for young students and anyone intrigued by these mind-boggling creatures that once roamed this planet." - 2018 Parents' Choice Awards;"Epic - this is history let out of a box" - The Daily Telegraph;"A strong choice for visual learners and information-seekers." - Publishers' Weekly

Nick Forshaw is an author and editor based in Berlin. He has written a history of the evolution of the dinosaurs, explored the way insects, arachnids and other creepy crawlies first developed, taken a close look at the way plants thrive on our green planet and investigated all the different species of mammal that have evolved on planet Earth.

Series creator Christopher Lloyd began his career as a journalist with the Sunday Times newspaper. He now has several books in print, including the bestselling What on Earth Happened? and Absolutely Everything! Chris divides his time between writing books and delivering lectures and workshops to schools, literary festivals, and a wide range of other venues around the world. He lives in Tonbridge, Kent, with his wife and two adorable terriers.