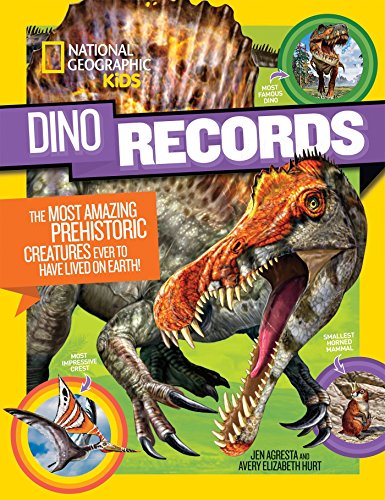 Curious which creatures ruled when dinosaurs roamed the Earth? Get ready to meet the record-setters, including the biggest, smallest, smartest, weirdest, deadliest, most notorious, and most mysterious of all time.

Dino Records : The Most Amazing Prehistoric Creatures Ever to Have Lived on Earth! (Dinosaurs) National Geographic Kids

Curious which creatures ruled when dinosaurs roamed the Earth? Get ready to meet the record-setters, including the biggest, smallest, smartest, weirdest, deadliest, most notorious, and most mysterious of all time.

You'll find fantastic firsts, including the first dinosaur fossils found and the first dinos in space. And you'll meet other rad, remarkable creatures that lived before, after, and alongside them. Did you know that the largest fish, the largest turtle, and the largest flying animal that ever existed lived during the time of the dinosaurs? Or that mammals - no bigger than a small dog when dinosaurs roamed - eventually evolved into massive land animals? See who wins in head-to-head species smack downs and enjoy games that complement the records.

"My son loves these books. We started reading National Geographic Kids books when he was about six (he's nine now) and I can honestly say that these books have been instrumental in teaching him to read." - Consumer

"My kids love these books. Super fun and interesting." - Consumer

The National Geographic Kid is curious about the world around them, empowered in the face of challenges and responsible for others and the natural world. Combining these principles with the international educational heritage of Collins, this partnership is a natural fit for books that are funny, weird, exploratory, educational and loved by children.