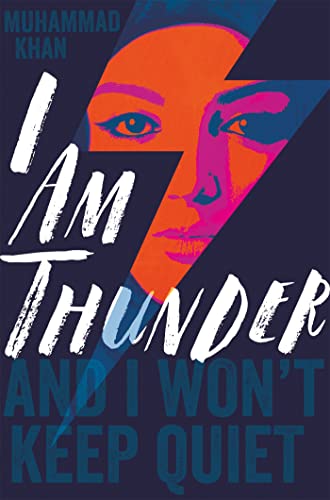 I Am Thunder Muhammad Khan

A shy girl trying to find her place in the world is forced to stand up and be heard when she uncovers a dangerous secret in this Branford Boase Award-winning first novel from Muhammad Khan.

I Am Thunder Muhammad Khan

I Am Thunder is the Branford Boase Award-winning debut novel which questions how far you'll go to stand up for what you believe.

Fifteen-year-old Muzna Saleem is used to being invisible. So no one is more surprised than her when Arif Malik, the hottest boy in school, takes a sudden interest.

But Arif is hiding a terrible secret and, as they begin to follow a dark path, Muzna faces an impossible choice: keep quiet and betray her beliefs, or speak out and betray her heart.

Muhammad Khan's stunning, multi-award winning YA writing gets right to the centre of what it means to be an urban teenager today.

'An uplifting, empowering novel with hope at its heart' Observer Children's Book of the Week

'This one is special . . . punches well above the weight of most debuts' The Times

'One of the most distinctive narrators I've read in ages.' Fiona Noble, Bookseller

An uplifting, empowering novel with hope at its heart * Observer Children's Book of the Week *
This one is special . . . Muhammad Khan has created a powerful, sophisticated and intensely likeable female narrator in this thrilling novel, which punches well above the weight of most debuts -- Alex O'Connell, The Times Children's Book of the Week
With its superb heroine, pitch-perfect dialogue, and sensitive examination of extremism preying on naivety, this assured, hopeful debut feels unprecedented and essential -- Imogen Russell Williams * Guardian *
Funny and clever - a perspective long overdue in British fiction -- Alex Wheatle, Guardian prize-winning author of Crongton Knights

This fierce, fresh UK debut has one of the most distinctive narrators I've read in ages. Muzna's warmth and heart transform what could have been a gritty "issues" book into a powerful call for hope and standing up for your beliefs

* Bookseller *
This is a poignant coming of age story about a young girl trying to work out where she fits in the world, and who she can trust * Scotsman *
Fans of Skins and The Hate U Give will feel right at home here * BuzzFeed *
[An] important, and well-needed YA novel. It will inspire Muslim teens who are looking for realistic representation in literature . . . [and] celebrates diversity. * The Bookbag *
An exciting new voice in YA -- Netgalley Books of the Month
The most vibrant, vivid voice I've encountered in a long time. Anyone who's interested in what it's like to be young, British or Muslim in the world today should read it, because it brings all those things to life with terrific power and emotion. -- S F Said, author of Varjak Paw, Booktrust Books of the Year 2018
Buy it, read it, devour it... A powerful story with a voice that was needed. YA world, you don't know the thunder that is coming your way! -- Samia Sharif, ssharifbooks.wordpress.com
We need more people like Muhammad Khan to craft stories like this to not only show that we are not alone, but also so people understand -- Humaira Kauser, Reader Review Panel member, lovereading4kids.co.uk
Khan's acute portrayal of Muzna captures both the joy and turbulence of being a teenage girl. His dialogue is fresh, and funny, and keeps the story zipping along, even when the characters are filled with uncertainty. The balance of culture, religion, and following one's heart have rarely been depicted with such nuance. * Branford Boase Award Judges *
This funny, gritty coming-of-age novel could not be more needed -- Izzy Read, Reader Review Panel member, lovereading4kids.co.uk
Nothing could be more timely or powerful. Perhaps Muhammad Khan is the strongest new voice in YA. I can't wait to see what he does next -- Jessica Hope, readbyjess.blogspot.co.uk
A big, heartfelt and ambitious book -- The Letterpress Project
Empowering . . . I Am Thunder isn't like any book you've read before, Khan is a pioneer in YA -- The Yellow Pen Pot, theyellowpenpot.wordpress.com
Trailblazing * BookRiot *
[A] searingly honest look at what it is to be a teenager struggling to find their own identity in a morass of competing pressures . . . I Am Thunder is a stunning debut written with confidence and a compelling voice -- Linda Wilson * crimereview.co.uk *
No half measures - this is an important as well as an immensely assured first novel * Books for Keeps *
An incredibly powerful debut novel that brings the reader a unique perspective . . . In order to foster tolerance and inclusiveness, the world needs more books like this. * WhatsOn *
A powerful debut about racism and the power of speaking out -- INIS Reading Guide - Editor's Choice
Muhammad Khan is an engineer, a secondary-school maths teacher, and now a YA author! He takes his inspiration from the children he teaches, as well as his own upbringing as a British-born Pakistani. He lives in South London and has an MA in Creative Writing from St Mary's. His debut novel I Am Thunder won the Branford Boase First Novel Award, the 2018 Great Reads Award and a number of regional awards. His second novel, Kick the Moon is also published by Macmillan Children's Books.
GOR009001970
9781509874057
1509874054
I Am Thunder Muhammad Khan
Muhammad Khan
Gebraucht - Sehr Gut
Broschiert
Pan Macmillan
2018-01-25
320
N/A
Die Abbildung des Buches dient nur Illustrationszwecken, die tatsächliche Bindung, das Cover und die Auflage können sich davon unterscheiden.
Dies ist ein gebrauchtes Buch. Es wurde schon einmal gelesen und weist von der früheren Nutzung Gebrauchsspuren auf. Wir gehen davon aus, dass es im Großen und Ganzen in einem sehr guten Zustand ist. Sollten Sie jedoch nicht vollständig zufrieden sein, setzen Sie sich bitte mit uns in Verbindung.