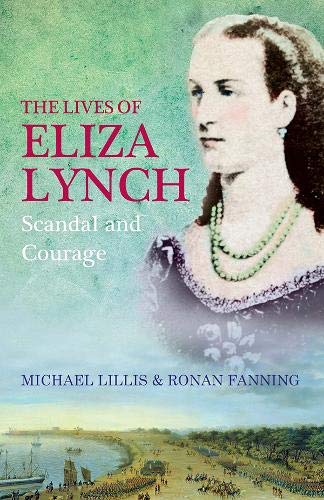 Eliza Lynch - the beautiful Cork-born 'Queen of Paraguay' and lover of the nineteenth-century Paraguayan dictator Francisco Solano Lopez was the most infamous woman in South America.

The Lives of Eliza Lynch: Courage and Scandal Michael Lillis

Her notorious reputation was invented by Paraguay's enemies in Brazil, Argentina and Uruguay (who wiped out over ninety per cent of the male population of Paraguay in the War of the Triple Alliance of 1864-70), and by Paraguay's tiny Spanish elite who hated her glamour and sophistication. `I represent Scandal,' she ruefully admitted.

The authors have discovered the truth about Eliza's Irish origins and the cruel deception of her marriage at the age of sixteen to a duplicitous French Army officer. They reconstruct the systematic invention of her image as a prostitute around her first meeting with Solano Lopez in Paris in 1854.

Eliza Lynch was a courageous woman who was adored by the ordinary women of Paraguay and who tried to help many victims of an appalling war. The paranoid Lopez, on discovering that his family and colleagues had been conspiring against him, trusted only Eliza and their relationship became a love story of the damned. The book reveals why the Emperor of Brazil, against the advice of his generals, pursued Lopez to his death in 1870; Eliza buried him and their eldest son in the jungle with her bare hands.

Eliza defied her enemies in a pamphlet she published in 1875 - here translated for the first time - when she returned to face her enemies in Paraguay. The authors' exclusive access to the unpublished journals of Eliza's daughter-in-law shows how scurrilous writers in South America, Britain and the US finally broke her spirit and how she died a `burnt-out case' in Paris in 1886. In 1961 a later dictator, General Stroessner, declared her the national heroine of Paraguay.