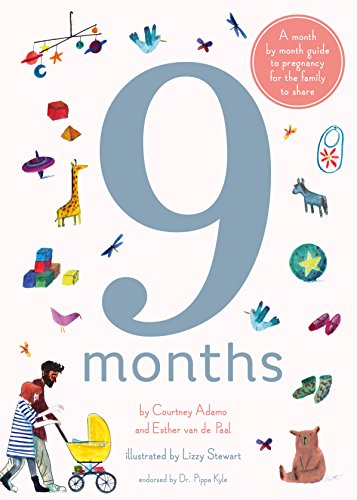 A fun and informative way to prepare your child for the arrival of their new baby brother or sister, written by two of today's most popular mum bloggers in the English language world.

9 Months: A month by month guide to pregnancy for the family to share Lizzy Stewart

Can you believe that every one of us started as a tiny egg in our mummy's belly? One tiny cell, not bigger than a speck of dust, will grow into a baby in just nine months time. In this book, we follow this amazing process called pregnancy, and see the miracle of a creation of a new life. This fun and informative way to prepare your child for the arrival of their new baby brother or sister is written by two of today's most popular mum bloggers in the English language world, and co-founders of Babyccino: Courtney Adamo and Esther Van de Paal. Their writing is accompanied by beautiful illustrations from Lizzy Stewart, the winner of the 2017 Waterstones Children's Book Prize, Illustrated Books Category.

'A beautifully illustrated monthly guide to pregnancy aimed at children aged four to seven.' --Smallish Magazine * Smallish Magazine *
'Helps children of all ages understand how babies develop, with sweet illustrations and no-nonsense facts.' * Baby London *
'If you're expecting your second baby and your toddler is starting to ask questions, read together 9 months. It explains how a baby grows in your tummy, what size the baby is each week, and has a 'How mummy is feeling' section which helps your toddler understand why you might be tired an unable to do as much as usual.' * Mother & Baby *

LIZZY STEWART is an illustrator and artist currently based in London. Lizzy graduated from Edinburgh College of Art in 2009, and received an MA in Communication Design from Central St Martins in 2013. She is also one half of independent publishers Sing Statistics and an associate lecturer at Goldsmiths College. Her first book, There's a Tiger In the Garden, was the winner of the 2017 Waterstones Children's Book Prize, Illustrated Books Category.

COURTNEY ADAMO lives in Byron Bay NSW, having recently relocated after spending 13 years in London. She and her husband have five children. Courtney is co-founder of the successful Babyccino (http://babyccinokids.com).

ESTHER VAN DE PAAL previously lived in New York City, Brussels and London, and now lives in Amsterdam together with her husband and their four children. Originally an architect, she now spends most of her time on Babyccino (http://babyccinokids.com) of which she is a co-founder.