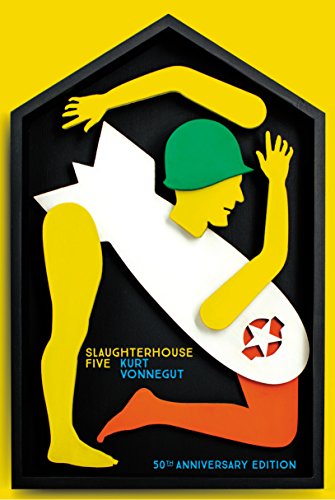 As a young man and a prisoner of war, Kurt Vonnegut witnessed the 1945 US fire-bombing of Dresden in Germany, which reduced the once proudly beautiful city to rubble and claimed the lives of thousands of its citizens.
For many years, Kurt tried to write about Dresden but the words would not come.

As a young man and a prisoner of war, Kurt Vonnegut witnessed the 1945 US fire-bombing of Dresden in Germany, which reduced the once proudly beautiful city to rubble and claimed the lives of thousands of its citizens.
For many years, Kurt tried to write about Dresden but the words would not come. When he did write about it, he combined his trademark humour, unfettered imagination, boundless humanity and keen sense of irony to create one of the most powerful anti-war books every written, and an enduring American classic.

This special edition is published with notes of appreciation from some of the book's ardent fans (Kate Atkinson, Richard Herring, Robin Ince) as well as fascinating extra material from Vonnegut's archive which casts light on the genesis, reception and enduring influence of an iconic American classic.

Marvellous...the writing is pungent, the antics uproarious, the wit as sharp as a hypodermic needle * Daily Telegraph *
A laughing prophet of doom * New York Times *
Mr Vonnegut knows a great deal about what is probably the largest massacre in modern history - the fire-bombing of Dresden in 1945. Slaughterhouse Five is a reaction to the event by one of our most gifted and incisive novelists. A work of keen literary artistry -- Joseph Heller, author of 'Catch-22'
I came to this book later in life. I think it is, among other things, the loveliest, most delicate account of post-traumatic stress I've ever read - like the water that simply runs from the eyes of Billy Pilgrim. -- Elizabeth Strout, author of 'My Name is Lucy Barton'
Unique...one of the writers who map our landscapes for us, who give names to the places we know best -- Doris Lessing
Kurt Vonnegut was born in Indianapolis in 1922 and studied biochemistry at Cornell University. An army intelligence scout during the Second World War, he was captured by the Germans and witnessed the destruction of Dresden by Allied bombers, an experience which inspired his classic novel Slaughterhouse-Five. After the war he worked as a police reporter, an advertising copywriter and a public relations man for General Electric. His first novel Player Piano (1952) achieved underground success. Cat's Cradle (1963) was hailed by Graham Greene as 'one of the best novels of the year by one of the ablest living authors'. His eighth book, Slaughterhouse-Five was published in 1969 and was a literary and commercial success, and was made into a film in 1972. Vonnegut is the author of thirteen other novels, three collections of stories and five non-fiction books. Kurt Vonnegut died in 2007.
NGR9781784874858
9781784874858
178487485X
Slaughterhouse 5: 50th Anniversary Edition Kurt Vonnegut
Kurt Vonnegut
Neu
Gebundene Ausgabe
Vintage Publishing
2019-03-26
256
N/A
Die Abbildung des Buches dient nur Illustrationszwecken, die tatsächliche Bindung, das Cover und die Auflage können sich davon unterscheiden.
Dies ist ein neues Buch - lesen Sie als Erster dieser Kopie. Mit unberührten Seiten und einer perfekten Bindung kann Ihre brandneue Kopie zum ersten Mal geöffnet werden.