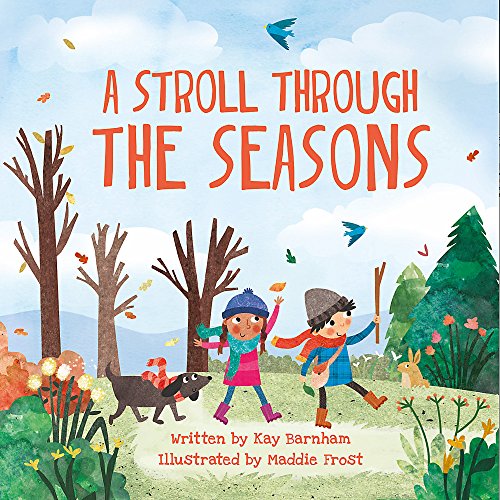 Look and Wonder: A Stroll Through the Seasons Kay Barnham

Look and Wonder: A Stroll Through the Seasons Kay Barnham

Take a stroll through the seasons! From bright spring blossoms to colourful autumn leaves, follow the wonderful changes that each season brings.

This beautifully illustrated picture book shows the glorious nature of each new season, from spring greenery, dazzling summer sunshine, vibrant autumn leaves and sparkling winter snow. Follow the journey of a young boy and girl as they stroll through wind, rain, sunshine and snow to explore the wonderful changes that each season brings.

'Look and Wonder' is a fresh, bold and bright, narrative non-fiction picture book series, for children aged 4 and up, introducing children to life cycles and the natural world. The eye-poppingly colourful digital illustration style will explain the scientific concepts while the light and fun text-style will make these books real home and classroom favourites.

Kay Barnham was born in Barrow-in-Furness, grew up in Carlisle, went to college in Brighton, and lived in Hove for a while, before sailing for Kinsale, Co Cork, popping back to Hove and then moving to the New Forest with her husband and daughter. And never at any point has she lived more than ten miles from the sea. She began working in children's publishing in 1992. She was an editor first of all, working on illustrated non-fiction and learning fun facts like how long it would take to walk to the moon - nine years - and how to spell palaeontology. Next, she commissioned fiction titles, editing picture books, storybooks and novels. And then she got the chance to write her own books, which she thinks is quite the best job ever. Except possibly being a chocolatier. She writes non-fiction as Kay Barnham. Her specialist subjects include ice-skating, Isambard Kingdom Brunel, lightning, fairies, Roald Dahl, Sir Isaac Newton, Christmas, dolphins, Florence Nightingale and very bad cracker jokes. And chocolate. She also writes fiction as Kay Woodward, including the Skate School series for Usborne and the novels Jane Airhead and Wuthering Hearts for Andersen Press. Altogether, she's written about a hundred books. Her favourite colour is navy blue. Her favourite chocolate is 85% cocoa solids. Maddie Frost is the author and illustrator of Once Upon a Zzzz, Animobiles and Wakey Birds. She is also the illustrator of The Littlest Things Give The Loveliest Hugs, A is for Artichoke and more. She lives with her husband and dog in Boston, USA.
GOR009274556
9780750299596
0750299592
Look and Wonder: A Stroll Through the Seasons Kay Barnham
Kay Barnham
Look and Wonder
Gebraucht - Sehr Gut
Gebundene Ausgabe
Hachette Children's Group
20170511
32
N/A
Die Abbildung des Buches dient nur Illustrationszwecken, die tatsächliche Bindung, das Cover und die Auflage können sich davon unterscheiden.
Dies ist ein gebrauchtes Buch. Es wurde schon einmal gelesen und weist von der früheren Nutzung Gebrauchsspuren auf. Wir gehen davon aus, dass es im Großen und Ganzen in einem sehr guten Zustand ist. Sollten Sie jedoch nicht vollständig zufrieden sein, setzen Sie sich bitte mit uns in Verbindung.