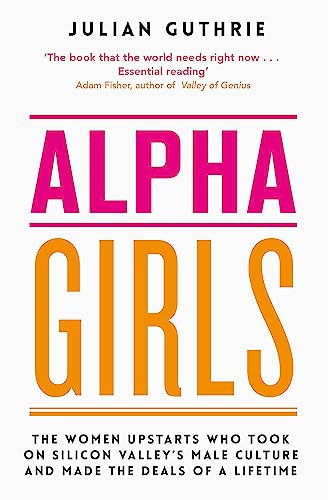 Silicon Valley has long been at the forefront of innovation, but it is renowned for its archaic sexist culture. Alpha Girls is the inspiring story of how a group of talented women have achieved success in a tech world run by 'bro-grammers' through sheer grit and determination.

Alpha Girls: The Women Upstarts Who Took on Silicon Valley's Male Culture and Made the Deals of a Lifetime Julian Guthrie

A Financial Times Summer Book of 2019

Described as 'the book that the world needs right now' (Adam Fisher, author of Valley of Genius), Alpha Girls is perfect for fans of Hidden Figures, Lean In and The Social Network.

Silicon Valley has long been at the forefront of innovation, but it is renowned for its archaic sexist culture. Alpha Girls is the unforgettable story how a group of talented women achieved success in a tech world run by 'bro-grammers' through sheer grit and determination. Despite the instrumental role they played in building some of the foremost companies of our time, these women have been written out of history - until now. In Alpha Girls, award-winning writer Julian Guthrie reveals their untold stories.

*Magdalena Yesil who arrived in America from Turkey with $43 to her name and would go on to help Marc Benioff build Salesforce.
*Mary Jane Elmore - one of the first women in the United States to make partner at a venture capital firm.
*Theresia Gouw, who helped land and build companies including Facebook, Trulia, Imperva and ForeScout.
*Sonja Hoel, the first woman investing partner at Menlo Ventures who invested in McAfee, Hotmail, Acme Packet and F5 Networks as well as founding an all-women's investment group and a national nonprofit for girls.

These women, juggling work and family, shaped the tech landscape we know today while overcoming unequal pay, actual punches, betrayals and the sexist attitudes prevalent in Silicon Valley. Despite the setbacks, they would rise again to rewrite the rules for an industry they love.

A revelatory, riveting journey into a part of Silicon Valley's history that has been overshadowed for far too long. Through vivid prose and artful story-telling, Julian Guthrie brings to life the nuanced tales of the struggles and successes of women in the technology industry -- Ashlee Vance, author of Elon Musk

Julian Guthrie is a mesmerizing storyteller, weaving the life stories of four dynamic women into a page-turning yarn. We don't just read of but feel the outrageous and often clueless male slights and insults, the double standards and blatant sexism endured by women in the blustery, male-dominated world of Silicon Valley. Yet Alpha Girls leaves you awed by their resilience and their professional feats. A stirring tale of triumph

-- Ken Auletta, author, New Yorker media critic
An extremely important addition to the literary canon of Silicon Valley, told through the honest and specific stories of a handful of individual women. Beautifully done -- Po Bronson, New York Times best-selling author of What Should I Do with My Life
The women of Alpha Girls had to grow some thick skin to survive and succeed. And succeed they did. Alpha Girls will reshape how you look at women in finance. A must read for women and girls interested in changing the world -- Sallie Krawcheck, CEO and Co-Founder of Ellevest
The story of four women who entered the tech industry to follow their dreams and managed through hard work and creativity to make those dreams come true. I'm glad Julian has written this book; we need to tell the success stories of women in tech -- Reid Hoffman, co-founder of LinkedIn and investor at Greylock Partners
If you read one book about women in business, Alpha Girls should be the one. Julian Guthrie has written another dazzler -- Peter Diamandis, New York Times best-selling author, founder and executive chairman of XPRIZE
Julian Guthrie is the best author writing about Silicon Valley today, and Alpha Girls is the book that the world needs right now. It's the real story behind the largest legal creation of wealth in the history of the planet. If you are a woman who works, or simply work with women, Alpha Girls is essential reading -- Adam Fisher, author, Valley of Genius: The Uncensored History of Silicon Valley
An intimate and addictive homage to the fearless female pioneers who made Silicon Valley blossom. Julian's vivid portrayals of once-hidden risk takers and mavericks will leave you heartbroken, hopeful and hungering for more -- Brian Keating, Professor of Physics UC San Diego, author of Losing the Nobel Prize
Finally, it's here: a book about Silicon Valley as seen through the accomplishments of the powerful women who, against all odds, made their mark there. Alpha Girls offers an inside look at the true meaning of grit and drive and upends the myth that it is only men who create and build tech companies. For any young woman in search of a role model, or any young man too, Alpha Girls is a must read -- Caroline Paul, author of The Gutsy Girl
Alpha Girls is about four women in a high-stakes, high-drama world. Each of these women's stories is gripping, treacherous and heroic. They are being pulled out from behind the gender curtain and given their rightful place in contemporary history -- Cathy Schulman, President of Welle Entertainment, Academy Award winning producer, founder Women in Film
Once I started reading Alpha Girls, I couldn't put it down. The story of these VC women trailblazers must be told, and Julian tells it brilliantly. The book stimulates reflections on how we must accelerate changes in ourselves, at home, and in the workplace -- Judy Vredenburgh, president & CEO, Girls Inc.
Swot up on how the women of Silicon Valley crushed it in the land of the 'tech bros' * Glamour *
Alpha Girls thrillingly follows the addictive stories of four incredible women who did things their own way and rewrote the code of a whole industry * Emerald Street *
Through a series of meticulously detailed portraits . . . Guthrie writes a revisionist history of America's second Gold Rush - one in which women are the protagonists and money-makers . . . Alpha Girls is crammed with details that bring events and situations alive . . . Underpinning it all is a tone of relentless optimism -- Aliya Ram * Financial Times *
JULIAN GUTHRIE spent 20 years writing for the San Francisco Chronicle, where she won numerous awards, including the Society of Professional Journalists Public Service Award and the Best of the West Award. Her writing has been nominated multiple times for the Pulitzer Prize. She is the author of three nonfiction books: The Grace of Everyday Saints, The Billionaire and the Mechanic, and How to Make a Spaceship.
GOR009797414
9780349420257
0349420254
Alpha Girls: The Women Upstarts Who Took on Silicon Valley's Male Culture and Made the Deals of a Lifetime Julian Guthrie
Julian Guthrie
Gebraucht - Sehr Gut
Broschiert
Little, Brown Book Group
2019-04-23
304
N/A
Die Abbildung des Buches dient nur Illustrationszwecken, die tatsächliche Bindung, das Cover und die Auflage können sich davon unterscheiden.
Dies ist ein gebrauchtes Buch. Es wurde schon einmal gelesen und weist von der früheren Nutzung Gebrauchsspuren auf. Wir gehen davon aus, dass es im Großen und Ganzen in einem sehr guten Zustand ist. Sollten Sie jedoch nicht vollständig zufrieden sein, setzen Sie sich bitte mit uns in Verbindung.