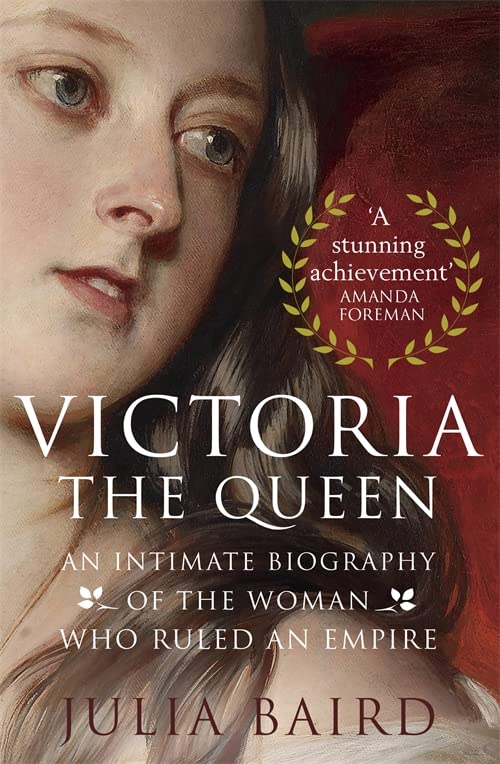 'A stunning achievement . . .Neither sanitized nor mythologizing, Victoria: The Queen is a remarkably lucid, endlessly engaging account of Queen Victoria's life and rule' Amanda Foreman

Victoria: The Queen: An Intimate Biography of the Woman who Ruled an Empire Julia Baird

NAMED ONE OF THE BEST BOOKS OF THE YEAR BY JANET MASLIN, THE NEW YORK TIMES

The true story for fans of the hit ITV drama series Victoria starring Jenna Coleman, this page-turning biography reveals the real woman behind the myth: a bold, glamorous, unbreakable queen. Drawing on previously unpublished papers, this stunning book is a story of love and heartbreak, of devotion and grief, of strength and resilience.

When Victoria was born, in 1819, the world was a very different place. Revolution would begin to threaten many of Europe's monarchies in the coming decades. In Britain, a generation of royals had indulged their whims at the public's expense, and republican sentiment was growing. The Industrial Revolution was transforming the landscape, and the British Empire was commanding ever larger parts of the globe. Born into a world where woman were often powerless, during a century roiling with change, Victoria went on to rule the most powerful country on earth with a decisive hand.

Fifth in line to the throne at the time of her birth, Victoria was an ordinary woman thrust into an extraordinary role. As a girl, she defied her mother's meddling and an adviser's bullying, forging an iron will of her own. As a teenage queen, she eagerly grasped the crown and relished the freedom it brought her. At twenty years old, she fell passionately in love with Prince Albert of Saxe-Coburg and Gotha, eventually giving birth to nine children. She loved sex and delighted in power. She was outspoken with her ministers, overstepping boundaries and asserting her opinions. After the death of her adored Albert, she began a controversial, intimate relationship with her servant John Brown. She survived eight assassination attempts over the course of her lifetime. And as science, technology, and democracy were dramatically reshaping the world, Victoria was a symbol of steadfastness and security-queen of a quarter of the world's population at the height of the British Empire's reach.

Drawing on sources that include revelations about Victoria's relationship with John Brown, Julia Baird brings vividly to life the fascinating story of a woman who struggled with so many of the things we do today: balancing work and family, raising children, navigating marital strife, losing parents, combating anxiety and self-doubt, finding an identity, searching for meaning. This sweeping, page-turning biography gives us the real woman behind the myth.

Vividly written . . . it captures its subject with verve -- Daisy Goodwin * Sunday Times *
A stunning achievement . . .Neither sanitized nor mythologizing, Victoria: The Queen is a remarkably lucid, endlessly engaging account of Queen Victoria's life and rule * Amanda Foreman *
In Baird's deft portrayal, Victoria lives, breathes, and struts before us in all her complexity...On a geopolitical level, Baird's sweeping historical portrait also illuminates just how interconnected the European royal families were during this time...Historical astuteness aside, the pages gallop along enhanced by titillating morsels of info * Esquire *
A vivid portrait of one of England's longest-reigning monarchs * Entertainment Weekly *
Julia Baird's exquisitely wrought and meticulously researched biography, brushes the dusty myth off this extraordinary monarch. Right out of the gate, the book thrums with authority as Baird builds her portrayal of Victoria. Overturning stereotypes, she rips this queen down to the studs and creates her anew...Baird writes in the round. She constructs a dynamic historical figure, then spins out a spherical world of elegant reference, anchoring the narrative in specific detail and pinning down complex swaths of history that, in less capable hands, would simply blow away * New York Times *
"Read no history: nothing but biography, for that is life without theory." So said Prime Minister Benjamin Disraeli. He would have loved this big, blowsy bio of his sovereign. Queen Victoria was a lusty wife, a doting mother and "a clever and forceful" politician. Baird excavates Victoria the woman from beneath the ice-sheets of past and present myth. * Sunday Express *
Victoria was young enough when she assumed the throne to consult with her prime minister about her eyebrows (were they too thin?), confident enough when she married to excise the word 'obey' from her vows. Julia Baird vividly captures her in every light, at once bold and sentimental, stubborn and deferential. Victoria: The Queen is a crisp, sparkling account of the extraordinary woman whose reign was as long as her legacy is vast * Stacy Schiff *
[Baird's] portrayal of the ways in which Albert's brilliance and industry reinforced Victoria's inferiority complex . . . and the subsequent revelation of her ability to rule alone after his death, is one of the undoubted strengths of Baird's work -- Mark Bostridge * Times Literary Supplement *
Fascinating * Vogue *
Baird's extensive research has enabled her to complete an accessible and engrossing book which easily lives up to its claim to be an "intimate biography" * Herald *
Julia Baird is a journalist, broadcaster and author based in Sydney, Australia. She is a columnist for the International New York Times and host of The Drum on ABC (Australia). Her writing has appeared in Newsweek, the New York Times, Philadelphia Inquirer, Guardian, Washington Post, Sydney Morning Herald, Monthly and Harper's Bazaar. She has a PhD in history from the University of Sydney. In 2005, Baird was a fellow at the Joan Shorenstein Center on Media, Politics and Public Policy at Harvard University.
GOR008155423
9780349134505
0349134502
Victoria: The Queen: An Intimate Biography of the Woman who Ruled an Empire Julia Baird
Julia Baird
Gebraucht - Sehr Gut
Broschiert
Little, Brown Book Group
2016-11-22
752
N/A
Die Abbildung des Buches dient nur Illustrationszwecken, die tatsächliche Bindung, das Cover und die Auflage können sich davon unterscheiden.
Dies ist ein gebrauchtes Buch. Es wurde schon einmal gelesen und weist von der früheren Nutzung Gebrauchsspuren auf. Wir gehen davon aus, dass es im Großen und Ganzen in einem sehr guten Zustand ist. Sollten Sie jedoch nicht vollständig zufrieden sein, setzen Sie sich bitte mit uns in Verbindung.