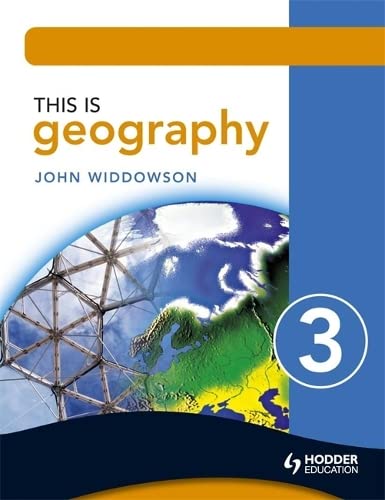 This is Geography is a major new course for the revised Geography curriculum for Key Stage 3 Geography.

It helps you do more learning with less content - precisely what the revised curriculum is about.

This is Geography is a major new course for Key Stage 3 Geography aiming to raise standards of teaching and learning.

- Less content, more learning - a streamlined scheme of work which focuses on the essentials and which therefore allows teachers to do in-depth work on real world topics that really matter to pupils

- Worthwhile and significant tasks - every unit builds, step by step, towards an engaging and significant final task. These tasks use the full range of learning styles to provide something for all pupils.

John Widdowson is a geography teacher and author of successful and award-winning geography titles. He is the author of the Earthworks series - which twice won the Geographical Association's Silver Award for educational resources and of the Geography Special Needs Support Material used in hundreds of schools all around the country to raise achievement among lower ability pupils.

He has always lived and worked in east London. He knows the area inside out and has seen plenty of changes. The latest, and probably the biggest, is the Olympic Park, right on his doorstep.

'One of the things that attracted me to geography teaching was its potential to get students out of the classroom and into the real world. As a teacher in east London, this is my classroom! So, as more and more schools started to arrive from other parts of the country wanting to see what was happening at the Olympic Park, I decided to offer them an exciting and worthwhile geographical experience. That is why I now run urban geography courses in east London.