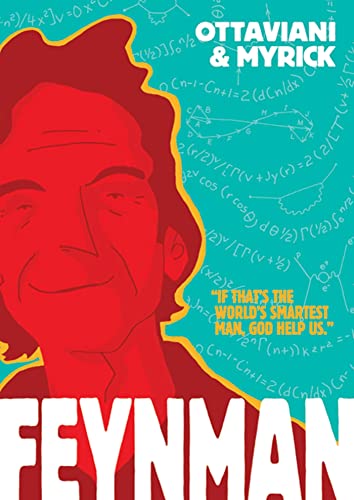 Written by nonfiction comics mainstay Ottaviani and brilliantly illustrated by First Second author Myrick, "Feynman" tells the story of the great man's life from his childhood in Long Island to his work on the Manhattan Project and the "Challenger" disaster.

In this substantial graphic novel biography, First Second presents the larger-than-life exploits of Nobel-winning quantum physicist, adventurer, musician, world-class raconteur, and one of the greatest minds of the twentieth century: Richard Feynman. Written by nonfiction comics mainstay Jim Ottaviani and brilliantly illustrated by First Second author Leland Myrick, Feynman tells the story of the great man's life from his childhood in Long Island to his work on the Manhattan Project and the Challenger disaster. Ottaviani tackles the bad with the good, leaving the reader delighted by Feynman's exuberant life and staggered at the loss humanity suffered with his death.

Anyone who ever wanted to know more about Richard P. Feynman, quantum electrodynamics, the fine art of the bongo drums, the outrageously obscure nation of Tuva, or the development and popularization of the field of physics in the United States need look no further than this rich and joyful work.

"These images capture with remarkable sensitivity the essence of Feynman's character. The comic-book picture somehow comes to life and speaks with the voice of the real Feynman." --Freeman Dyson, The New York Review of Books

"...a penetrating and insightful biography" --Washington Independent Review of Books

JIM OTTAVIANI (Feynman, Primates) is the world's preeminent writer of comics and graphic novels about science. Notable works include a biography of Niels Bohr and the fast-paced tale of the desperate lives of early paleontologists and T-Minus: The Race to the Moon, from Aladdin books. He has worked as a nuclear engineer and is currently employed as a reference librarian in Ann Arbor, Michigan.

LELAND MYRICK (Feynman, Missouri Boy) is the Ignatz Award- and Harvey Award-nominated author and illustrator of The Sweet Collection and Bright Elegy. His writing and illustrations have appeared in publications as diverse as Dark Horse Comics, GQ Japan and Vogue Russia. He grew up in Missouri, a place that has inspired much of his poetry and art, and he now lives in Pasadena, California, with his wife and daughter.